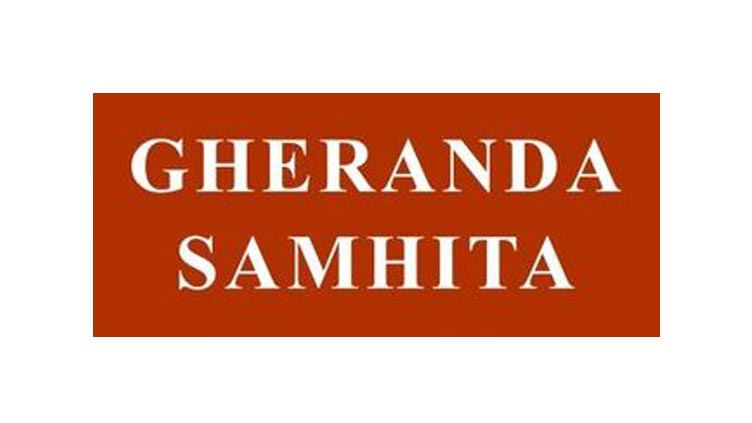 Gheranda Samhita is one of the three classic books of Hatha Yoga. It is considered one of the best classical books with profound knowledge. The exact author and published date of this world famous Hatha yoga book is unknown. However, experts have researched and concluded that the book may have been written around the seventeenth century. Also, the revised edition was published in 1933 and the second revised edition in 1978.

Gheranda Samhita is the book that follows the step by step teachings given by sage Gheranda to his student Chanda.The book Gheranda Samhita describes itself as the book for vessel yoga. In sanskrit it is called as ghatastha yoga. The book says that our mind and body are the vessel that carries the soul. The function of the body is to hold the spirit and serve its orders. The book is based in this principle.

The book consists of seven chapters and contains 351 slokes in total.

The seven chapters are:

In all of these chapters, Gheranda Samhita describes 32 postures in detail. However, the book mentions there are more asanas.

Shatkarma are defined as the set of actions or more specifically set of Hatha yoga that are performed for the purification of the body. One can say satkarma is the entry point towards the Hatha yoga. By performing satkarma one makes their body ready for yoga.

There are various satkarma mentioned in Gheranda Samhita. They are:

Neti
Neti is the cleansing of the nasal passages. Jal neti, Sutra neti and Ghrit neti are the three types of neti used for nasal passages cleansing. Neti pot, ionized salt and purified water are the equipments that are needed to perform Neti correctly.

Dhauti
Dhauti is the process of cleaning the digestive sytem of the upper region. Dhauti cleans the food pipe to the upper stomach area. Dhauti is used for maintaining acidity, extra mucus and keeping the intestinal elements in balance.

Vaman Dhauti, vastra Dhauti and Danda Dhauti are the three types of dhauti for cleaning the upper intestine.

Nauli
Nauli kriya is the step wise step contracting are releasing the stomach muscles to clean the stomach. It is one of the very advanced form of yoga where one need complete proficiency over the stomach muscles and breathing pattern to be able to do properly.
Pachima nauli, madhyana nauli and vama nauli are the three types of nauli practices. One of the biggest benefits of nauli is the strong core and abdominal muscle.

Basti
Basti is the technique for the cleansing out the large intestine. Jal basti and Danda basta are the two type of basti mentioned in Gheranda Samhita. It is done to ease people with complex digestive issues.

Kapalabhati
Kapalbhati is a respiration technique. It is a repetative breathing exercise where a passive inhale is followed by active exhalation. This technique is done for the purification of the lungs and respiratory system.

Trataka
Trataka is an eye yoga or gazing exercise. In this one must keep watching a fixed point or a candle. The goal is to keep staring without blinking till the tears start to flow.

Chapter 2 of Gheranda Samhita gives a description of asanas. According to Gheranda Samhita there are eighty-four hundreds of thousands of asanas described by Lord Shiva. The postures are in as many numbers as there are living creatures in the world. Among those vast number of asanas, 84 are the best while only 32 have been found useful for humankind in this world.

Chapter 3 of Gheranda Samhita describes 25 mudras. The 25 mudras are said to give the user happiness, liberation, healthy body and healthy mind. When the yogi practices these mudras, they succeed in life as well as in yoga.

In Gheranda samhita Mahadeva also warns that the knowledge of mudras is very sacred. Therefore, should not be given to just anyone. Only the ones worthy should be passed on this eternal knowledge. These mudras which gives emancipation and happiness should be taught to gulieless, calm and peace minded person. Who is devoted to the teacher and comes from a good family.

Gheranda Samhita tells that pratyahara is the knowledge that destroys passion such as lust. Let the one bring his Chitta under his control by withdrawing it, whenever it wanders away drawn by the various objects of sight. Praise or censure; good speech or bad speech; let one withdraw his mind from all these and bring the Chitta under his control.

From the sweet smells or bad smells, by whatever odor the mind may be distracted, or attracted, let one withdraw the mind from that. Bring the thinking principle under the control of his self.
From sweet or acid tastes, from bitter or astringent tastes, by whatever taste the mind may be attracted. Let one withdraw from that, and bring it under the control of his self.

Chapter 4 of Gheranda samhita describes the power that one must possess over oneself. One’s Chitta is very energetic and resonates and vibrates even to minute thoughts. One must control their Chitta from wandering to unwanted and bad places.

Pranayama is the control and balancing the wind element in the body. Gheranda samhita tells that by the practice of pranayama, man can become like god. First, there are some rules that need to be followed to practice pranayama, they are:

They are some of the many rules that are mentioned in Gheranda samhita.

Gheranda samhita says that the Vayu cannot enter the Nadis as long as they are full of impurities. Therefore, before the practice of the pranayama the Nadis should be purified.

The purification of Nadis are done by two ways:
Samanu and Nirmanu

Samanu
Samanu is a mental process and is done by chanting of the bija mantra.

There are 10 Vayu’s, Prana, Apana, Samana, Udana and Vyana; Naga, Kurma, Krikara, Devadatta and Dhananjaya.
The prana moves always in the heart, Apana is the sphere of the anus. Samana is the naval region, Udana in the throat. Vyana pervades in the whole body. They belong to the inner body.

The naga Vayu performs the job of eructation; Kurma opens the eyelids, Krikara causes the sneezing. Devadatta causes yawning and Dhananjaya pervades the whole gross body. It does not leave the body even after the death. These are the five external Vayu’s.

The body of Vayu is ninety-six digits length as a standard. The ordinary length of air current when expired is twelve digits. Ghernda samhita says that by increasing the natural length of the expired current from nine inches to less and less. There takes place of life and vice-versa.

Until breath remains in the body there is no death. When the full length of the wind is confined in the body, nothing allowed to go out, it is Kevali kumbhaka. The Kevali kumbha should be performed eight times a day. Once in every three hours.

He who knows pranayama and Kevali are the real yogi. One who has attained success in Kevali kumbhaka can gain anything they desire in this world.

Let the yogi imagine that in the pericarp of the great thousand petalled lotus, there is smaller lotus having 12 petals. Its color is white, luminous, having twelve bija letters. In the pericarp of the smaller lotus there are three lines forming a triangle. Having three angles called ha, la, Ksha and in the middle of the triangle there is the Pranava (OM). Then let him contemplate, that there is a beautiful seat having Nada and Bindu. On that seat there are two swans and a pair of wooden sandals. There let him contemplate his guru deva, having two arms and two eyes dressed in pure white. By contemplating this guru, gross contemplation is obtained.

Gheranda samhita says that in the muldhara there is kundalini, having the form of the serpent. The jivatma there is like the flame of the lamp. Contemplate on this flame as the luminous brahma. This is the jyotir dhyana.

According to Gheranda samhita, by a great good fortune kundalini is awakened. It joins with the Aatma and leaves the body through the portal of two eyes. Then it enjoys itself by walking in the astral light. The yogi however, attains this sucess by performing Sambhavi mudra. Then he will see his Sukshma Sarir. This is called Sukshma dhyana. Gheranda samhita says that it is even difficult to be attained by the gods and is a great mystery in itself.

Chapter 7: Samadhi for self-liberation and bliss

Samadhi is the concluding chapter of Gheranda samhita. Samadhi is the greatest yoga. It is acquired by the great fortune and hardship. It is attained by the grace and kindness of the guru and by intense devotion to him.

The yogi quickly gains this most beautiful practice of samadhi, who has faith in knowledge, faith in his guru, faith in his own self. Their mind moves toward the intelligence day by day. Separate the mind from the body, and unite it with the Paramatma. This is known as samadhi or Mukti from all consciousness. I am brahma, I am nothing else. The brahma is certainly I; I am beyond sorrow. I am existence and bliss always free, of one essence.

Vishnu is water, Vishnu is earth, Vishnu is on the peak of the mountain, Vishnu is in the midst of volcanic fires and flames. The whole existence is full of Vishnu. All those that walk on land or move in the air, all living beings, trees, grass, ocean all are part of Paramatma. See them all in atman.

The atman confined in the body is conscious, it is the highest and eternal without a second. Knowing it separate from body let him be free of desires and passion. Thus, is samadhi obtained free from all desires.