Significance Of Number 108 In Spirituality & 1008 The Auspicious Number 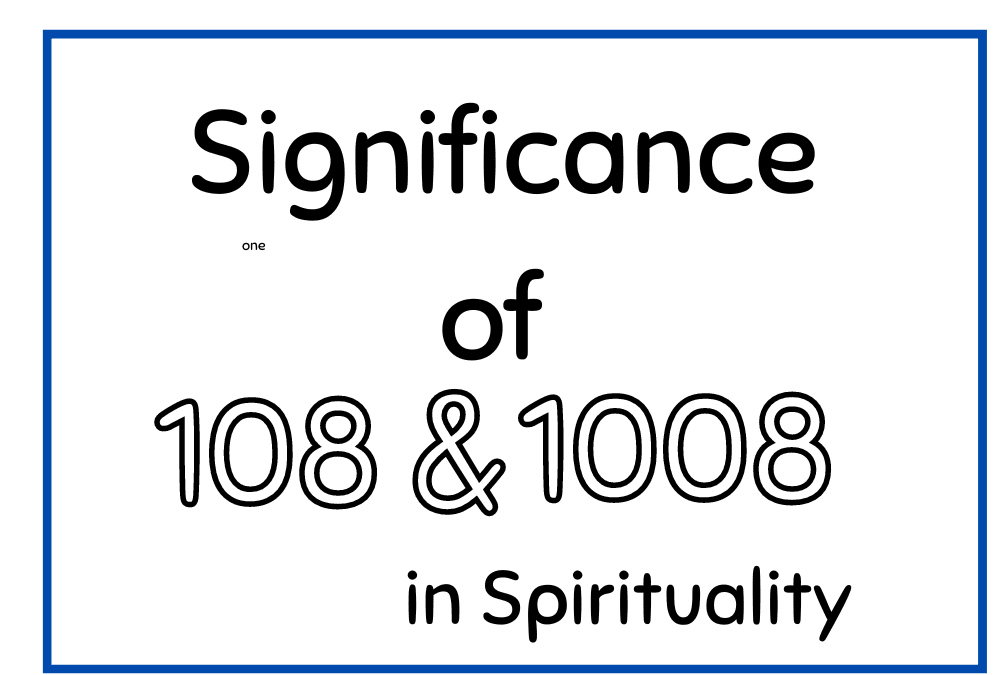 Significance of number 108 in Spirituality and 1008 the auspicious number

Have you ever pondered the significance of the number 108 in Spirituality in Indian religion? Have you ever questioned the logic behind the recommended repetition of a mantra 108 times? We’ve compiled a list of potential explanations for these inquiries.

The number 108 in Spirituality holds special significance in Hindu and Buddhist traditions. Reasons and meanings for this can be found in many places. Here are some of them:

The number 108 in Spirituality is composed of three digits, each of which can be understood symbolically. The number 1 represents being all alone and united in spirit. In shunya samadhi, the soul purges itself of its karmic burdens, and this is symbolised by the number 0.

Only after the removal of the Karmic body can the Soul’s 8gunas be seen. There are eight karmas that make up this karmic body, and they protect the eight gunas that make up a soul. The combination of the numbers 1 and 0 is 108, which stands for “the way to freedom.”

What are various meanings of the number 108?

We take about 108,000 breaths a day. The significance of breath control in any sadhana is thus underscored by the fact that the percentage of its total is 108 that signifies number 108 in Spirituality. The Navkar Mantra pads all represent different gunas.

There are 12 gunas for Arihants, 8 for Siddhas, 36 for Aacharyas, 25 for Upadhyays, and 27 for Sadhus. When we add up all of these gunas, we get 108. This means that there are a total of 108 characteristics shared by the most deserving souls that shows number 108 in Spirituality.

When the distance to the Sun is divided by the Sun’s diameter, the result is approximately 108. In a similar vein, the diameter of the Moon yields a result of number 108 in Spirituality when divided by the distance between the Moon and Earth. As a result, we mistakenly attribute the same relative size to the Sun and Moon, despite their obviously different actual sizes.

The number of swapna doshas, or planetary energies, is 108 that shows number 108 in Spirituality. The subconscious brain is responsible for dreaming, or swapna, and it is this brain that can shape your future and grant you atmadarshan. You can rid your subconscious mind of sloth and the swapnadoshas by chanting any mantra 108 times.

Karma Ashrava can leave a mark on your soul in 108 different ways. By recognising number 108 in Spirituality, a guru as shri 108/1008, you show reverence for the guru’s liberation efforts and the fact that the guru is not amassing Karm ashravas around his or her soul.

A total of 27 nakshatra can be seen in the night sky, and their circular presence affects four cardinal directions. The magnitude of this energy is represented by the pattern of 108, in number 108 in Spirituality which can be calculated by multiplying 27 by 4.

Life’s events are the direct result of our past actions, which are influenced by the nine planets that make up our “Karmic body.” There are 12 zodiac signs that are used to classify people. The number 108 in Spirituality provides insight into the planetary motions in our Karm Marg. In the same way that 129 equals 108.

Chakra is an antiquated Sanskrit term for a revolving or rotating wheel. Meaning “energy centres” in yoga, it describes where the life force circulates.

There are 112 chakras total, with 108 located in the physical body and 4 located in the astral. To represent these accessible energy centres that enable us to go beyond the material world, the rosary has 108 beads which again shows number 108 in Spirituality. The ancient Yogis discovered that only the 7 major chakras need to be activated in order to feel a surge of energy.

What is the spiritual meaning of 1008 the auspicious number?

The road you’ve chosen may be littered with both minor setbacks and major challenges. Nonetheless, there will be a great deal more celebration and contentment. It is imperative that you have unwavering faith in this universal law. The energies of the number 1 are present in angel number 1008, along with those of the number 8. (8).

The angels in the message for number 108 in Spirituality are trying to reassure you by mentioning the One. Although you seem to be acting in a confused manner, this does not make your course of action any less correct. By drawing on the One’s qualities of insight and sound judgement, you can keep your eye on the prize at all times.

In the angels’ message, the number 108 in Spirituality serves as proof that your recent efforts to better your financial and social standing were divinely inspired. So, until your situation changes, there’s nothing stopping you from continuing along the same path.

If you see the number 18, it means that your hard work and dedication, coupled with your stellar reputation and professional standing, will finally pay off. Many people in the world lack both of these qualities and are in need of someone they can entrust with their money. Seize the opportunity to guarantee your success.

Brief Description of Angelic Event Identified with the Number 1008

If you are spiritually attuned from number 108 in Spirituality and want to raise people’s consciousness about spiritual matters, the time is now, as indicated by the Angel Number 1008.

You can accomplish number 108 in Spirituality by devoting your life to spiritual practise or by working as a spiritual mentor. So, the angels will assist you in realising your full potential and achieving phenomenal success in this endeavour.