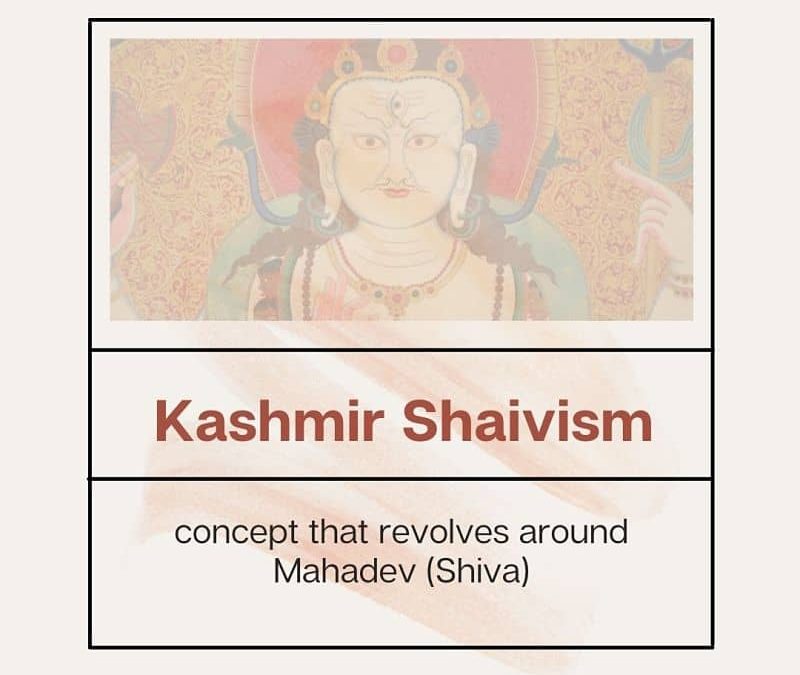 Kashmir Shaivism is one of the many concepts and ideology of the Hindu mythology. The concept, teachings and followings of Kashmir Shaivism diverts from the mainstream following of Hinduism. This nondual tradition originated around 850CE. Even though it is a Hindu concept many Hindus may not know about this culture. Kashmir Shaivism is a tradition and concept that revolves around Mahadev (Shiva) as the center component. It has its own teachings, following and unique traditions.

Hinduism is a very vast religion, there is no religion that is more complexed and diverse than Hinduism. There is never just explanation and interpretation to the concept of Hinduism. The religion celebrates multiple gods, atheism, singular god, female gods, elemental gods all at the same time. The religion is most prominent around the south Asian sides I.e., Nepal, India, and other surrounding country.

Religion is widely integrated into the religions and people celebrate the religion very differently than one another. Some celebrate one or two deity above other deity; some are Hindu by religion but do not believe in the concept of God. All these diversity on the concept exists inside the roof of the same religion.

Lord shiva is one of the trinities of Hindu mythology aside from Brahma and Vishnu. Among the trinity Lord Shiva is called as the destroyer as his duty to the universe is to destroy it. When the universe completes its life lord shiva destroys the universe so that new life can be created from there.

Lord Shiva has the companionship of Goddess Parvati. Lord shiva and goddess Parvati lives on Mt. Kailash and have Lord Ganesh and Lord Kumar Kartikaya as the children. Aside from having the duty to destroy the universe Lord Shiva have many tasks to the world. Lord shiva is also called as the god of dance as well as the founder of yoga. He also destroys the evil demons and evil doers who hampers the delicate balance of the universe.

In Hindu mythology the appearance of Lord Shiva is depicted as a tall male with a third eye in forehead. He has long hair with half crescent moon in it and from the hair’s goddess ganga originates. He wears tiger and elephant skin as clothes, wears snake in neck as ornaments. He decorates his body by the ashes, wields the weapon Trishul in one hand and wields Damrau in other. His rides an old ox to travel which name is Nandi.

What is Kashmir Shaivism

The teachings further describe God as the one. God is the world that we exist in and, vice-versa. While some other variations of Hinduism teach the physical world as the maya and illusion. It teaches physical world should be avoided and spiritual world and peace should be pursued.

However, Kashmir Shaivism teaches that God created everything and is everything. There is nothing more and real than the world. Only one reality exists and that is the world we live in. The true illusion is the idea of dualism and existence of the multiple worlds. The idea holds god’s creation as superior and inferior, diversifies and is not logical and is invalid.

Tantras are the special Mantras, Chanting or ability that has mystic ability and grants the chanter the thing they desire to some extent. Tantras existed in Hinduism from thousands of years ago. It is said that when the Dwapur Yug ended and the age of Kali begun with Kali Yug the Tantras were lost into time. Lord Shiva then incarnated in the form of Shrikantha Nath and then he taught Rishi Durvasha all the Tantras.

Rishi Durvasha after learning the tantras was tasked by lord Shiva to teach the Tantra to the peoples. Rishi Durvasha searched the world to find a student capable of learning and handling the power of Tantras. Even searching through meditation, he found no one worthy enough to hold the power. Then the Rishi created three sons from his mind so that he could teach Tantra to them.

The tradition of Kashmir Shaivism is an oral one. Meaning the teaching and learning of one generation is passed down to the other generation in oral form in Kashmir Shaivism. The oral practice to pass traditions, teachings have been used in multiple religions from thousands of years ago.

Kashmir Shaivism is a topic of interest to many as it is key to understand the ancient civilization and its teachings. However, most of the knowledge, teachings, books, and scriptures are lost to the time.

Swami Lakshman Joo is someone whose name must be spoken whenever the topic will be Kashmir Shaivism. But who is he? Why he should be mentioned? What is his contribution to the subject matter?

Shiva is Shakti (Parvati) and Shakti is Shiva, they are identical one and the same. The person who has realized the truth of Anuttara can feel the presence of God in all the existence. While, God resides in everything and everyone, Anuttara makes the presence of the God felt.

Aham in Kashmir Shaivism is defined as the supreme heart, the heart of Shiva. It is the ability to transcend and go beyond and rise above. Rising above means to gain infinite consciousness but not above everyone as in this tradition everyone in the existence in equal. Aham is the final resting place, it is the destination of who has regained their consciousness and have true knowledge. Aham is also called as the Beeja mantra. It is the core and energy of all the mantra and mantra energy in the world.

Kaula in Sanskrit is the family name. It exists in Hindu family in an extraordinarily complex manner. Every family has a unique Kaula name. Everyone with the same Kaula name is considered as the family. Kaula is the bond of blood within the family members and ultimately with the Lord Shiva himself.

Swatranta is the free will and independence. However, the Swatantra that is explained by the Kashmir Shaivism and what we know are hugely different things. Before the creation of universe, a cosmic force of freedom awakens and manifests itself inside the conscious of Lord Shiva. The culture tells that this is how life was formed in the universe. Swatantra is the property of life itself and the property of the universe, which ultimately makes it the character of Lord Shiva.

We think we are free in our lives and are experiencing true Swatantra. However, comparing it to the freedom described in Kashmir Shaivism what we are experiencing is only a small fragment of true freedom. We are bound by emotions, relations, and illusion. Freedom always exists beyond the illusion and the glitters of maya. Swatantra is the true and ultimate nature of Lord Shiva. This nature also exists within us as we all are the part of Lord Shiva himself. The Swatantra will get us beyond illusion and glitter, towards Lord Shiva himself.

Guru is the path. It is told in Kashmir Shaivism. Guru is the one to hold highest of spot in any divisions of Hinduism. Whatever the region, diversification, gods, and goddess the spot of guru remains always unchanged. The spot of guru is above everyone else, can never be replaced and the positive change that a guru brings into the life of the students can never be repaid.

Vasugupta was a man living in Kashmir. He was a righteous man who lived by following the rules of Dharma. In his daily life he always did the right thing and also helped the one around him as much as he could. One-night vasugupta saw Lord Shiva in his dream, who told him to go to Mahaddev mountain in Kashmir. On the mountain Vasugupta found the verses inscribed into the rock. These verses that were inscribed into the rock were the Siva sutras of Kashmir Shaivism. These sutras are also known as agamas in Hinduism.

The four schools of Kashmir Shaivism

Karma is the mono dualistic discipline in the stages that are needed before the realization. Karma is the true nature within everyone. Even the nonliving objects have their karma. The karma of the fire is to burn everything and give heat. The karma of water is to cool and end thirst. True karma of the individual sets them on the path of eternal liberation.

Kula is the family. The kula teaching makes the skeleton of Trantaloka and Trantasara.

Pratyabhijna translates to spontaneous recognition. Unlike in above types, in Pratyabhijna there is nothing to learn or practice. The only task here is to know who you are? And find yourself, your true self.