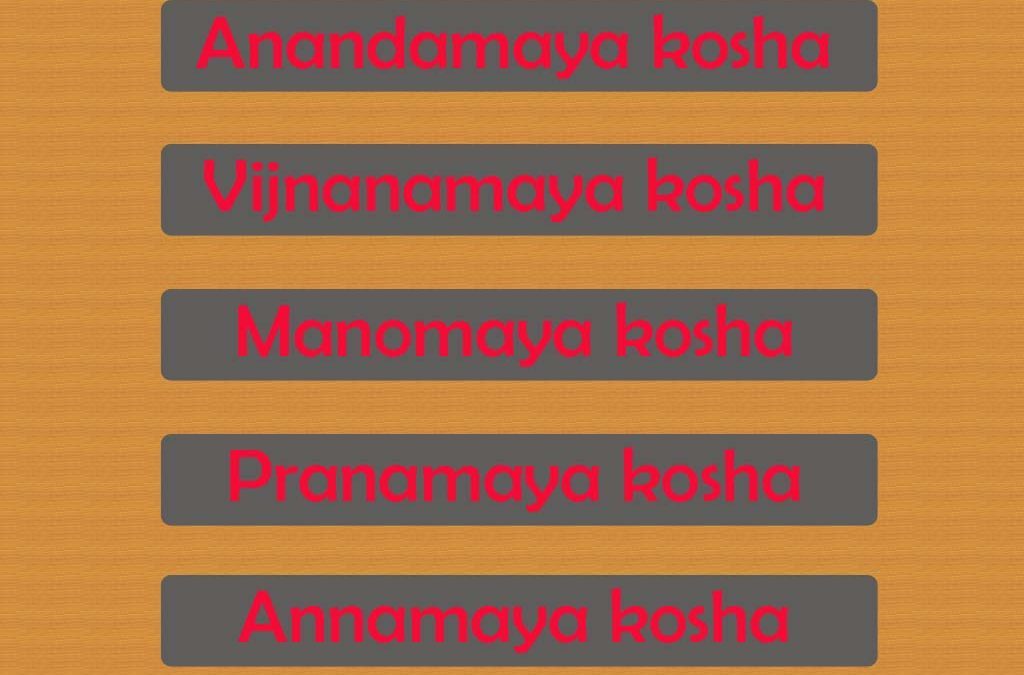 Annamaya kosha of Human body represents the physical body that is solid or gross which is connected with Sthula Sharir.  A person who is living in this layer recognizes himself as the mass of skin, bones, muscles, fat, and filth, whereas only a wise know the reality as it is, the true self, as separate from the body. It is formed with the food we take. In order to keep the annamaya kosha healthier, we give attention on a balanced diet, nutrition, and swatik food. So this is also called as the food body or the food sheath. The crops grown without the use of pesticides is also very important as people have been suffering from different problems due to harmful chemicals in food. This body requires proper exercise and rest for physical fitness. So people practice different types of exercises, yoga-asana (postures) for normal health. If the first body is pure and lighter, then it is easier to enter in the second one, pranamaya kosha. Proper fasting is also good to purify the Annamaya Kosha. One should also learn to witness the annamaya kosha during the fasting or it will not be effective.

The next layer of the body after annamaya kosha of human body is pranamaya kosha. It is the vital force i.e. pranic force which drives both the physical and the mental activities. It is an energetic sheath and keeps radiating.  Pranamaya Kosha is life force energy like electricity that gives heat and power to continue the life since it is the Kosha consisting living energy. Pranayama, chakra suddhi, Kundalini and Kriya etc are necessary to deal with pranayama kosha. The food has some effects on Pranamaya Kosha, so it requires the food earned with right action, with honest and just action. The food intake earned through dishonesty affects the pranic force as well as it causes different diseases in the physical body as well. A longer breath is the best diet for Pranamaya Kosha. One of the spiritual masters suggests taking 108 long breaths (before sunrise) between 3:30 and 5:30 am. Due to it, one becomes aware of the breath throughout the day which leads to longer breath.

Manomaya kosha of human body is also called as mind-sheath, the layer after the Pranamaya Kosha. The manomaya sheath consists of mind and manipulates the senses in mind acquired through sense organs.  It is the dimension of thoughts and mental awareness. This layer is composed of mind(manas) and intellect (Buddhi). The mind is thoughtful; several thoughts arise in mind throughout the day. The mind-sheath is more approximate to the personhood than the previous two koshas. Manomaya kopsha is the cause of diversification of I, me, and mine.  It carries the sanskaras. The bondage is caused due to sanskara which is at mind. This the cause of bondage and liberation is the mind. To manage the mind or thinking pattern; the intellect and awareness play a vital role. To balance manomaya kosha  mantra, pratyahara, Yantra , dharana, concentration, etc are practiced.

After the layer of manomaya kosha of human body, there lies an insight sheath called vijyanamaya kosha. This kosha is related to knowledge, thus it is also referred to as wisdom sheath. ‘Jnana’ means wisdom. The ability to discriminate right from wrong, virtue from vice is the function of this layer. It is an intellect body which receives information and knowledge from an outside source as well. The activity of this vijyanamaya kosha gives the ability to ask who am I, how can I help humanity?  The prefix ‘Vi’ signifies the intensity. It approaches the real source of wisdom which is hidden within us; to which we were unaware. As we start being aware or it, it becomes easier to transcend this kosha.

After the realization Vijnanamaya kosha, we move ahead to the next layer into the experience of anandamaya kosha. It is the realm of bliss, rapture etc. which consist of an unalloyed joy. It is the sheath consisting bliss. So, it is called the bliss body or the bliss sheath as well. Anandamaya kosha is the true state of ananda, connected to the deepest source. Only after experiencing Samadhi we can feel Anandamaya Kosha.

There are two types of joy- ephemeral and eternal. On the fulfillment of our desires and favorable situations, we acquire ephemeral or transitory joy while eternal joy is unconditional which is experienced after reaching anandamaya kosha.

Vedantic philosophy states that a wise person becomes mindful on the subtle influence of the five elements within each kosha, perennially cognize the self.

One of the interesting facts is that every physical cell has pancha kosha. Annamaya Kosha is connected with sthula sharir (physical body). Next three kosha- pranamaya, manomaya and vigyanamaya koshas are linked with shukshma sharir (astral body). The fifth sheath, anandamaya kosha is related with karan sharir (causal body).

There is an important series of yogic practice to deal with all pancha kosha. Yoga asana (postures) with adequate holding is practiced for the exercise of annamaya kosha. During the holding, awareness of breath is practiced focusing particular point. At this time, long breath with ujjayai sound can also be practiced to bring the mind in concentration. It is the part of pranayama to deal with pranayama kosha. The same sequence can be practiced again bringing deeper feeling and sensations on the body in each posture which deals with manomaya kosha of human body. The body gets tired after the practice of asana (postures), so savasana (corpse pose) or yog nindra (yogic sleep) is practiced after the completion of asana practice. This relaxation helps to communicate to vigyanamaya kosha.  Finally, the time is for meditation after savasana. Meditation is only the way to enter in the realm of anandamaya kosha.