Veda- The Oldest Scriptures of Hinduism 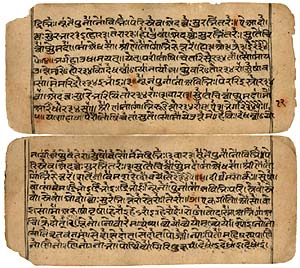 Veda- The Oldest Scriptures of Hinduism

The Vedas (Sanskrit- वेदः vedaḥ) which means “knowledge, wisdom”, are main eastern religious scriptures originating within the territory of ancient Nepal and India. They are the oldest scriptures of Hinduism. Vedic texts forge the most ancient Sanskrit literature. Vedas contain the depth and fundamental knowledge regarding to the prime cause of, function of, and individual reaction to supreme entity.

Vedas are also known as śruti (“what is heard”), which are different from smṛti (“what is remembered”). People regard the Vedas to be apauruṣeya, ie “not of a human, superhuman”.  Vedas are believed to be “authorless, impersonal”, manifestation of sacred syllable, sound of God and divine texts experienced by primitive yogis during accomplished meditation.

The term véda is derivated from the root vid which means “to know”. It has some similar meanings with the Proto-Indo-European root u̯eid-, meaning “know” or “see”. The homonymic singular perfect tense, 1st and 3rd person véda, associated to Greek (ϝ)οἶδα (w)oida “I know”. In south India, Vedas are also called Maṛai or Vaymoli. Marai literally means “hidden, a secret, mystery”. According to the hymn of Rig Veda at 10.93.11, “veda” means “obtaining or getting wealth, property”. Similarly the term also means “a bunch of grass together” for ceremony or as in a swab.

Types of Veda, Origin and History

There are four Vedas with special knowledge for the mankind:

II. Samaveda (Sanskrit- सामवेद): It is the knowledge about melodies, songs, melodies and music. It is a vedic liturgical scripture with 1,549 verses.

IV. The Atharvaveda ( Sankrit- अथर्ववेदः): The term “Atharva” means “knowledge”. It is the youngest among the vedas. It is the of atharvāṇas knowlwdge where the rules for everyday life is are provided. It has 20 chapters in kāṇḍas, 5,977 mantras. It was originated in the period c. 1000–900 BCE.

Each Veda has four subsectors

a) the Samhitas (literally- put together, union, join): They are collection of mantras, hymns litanies, prayers, and benediction.

b) the Aranyakas:  They are composed in Sanskrit 700 BC, related with rituals, ceremonies, sacrifices and symbolic-sacrifices. The Aranyakas talks on mystical and philosophical aspects and explications of esoteric rites.

c) the Brahmanas: They are about ceremonies, rituals, and sacrifices,

d) the Upanishads: The discuss about meditation, philosophy and spirituality.

Some learned consider the fifth subsector – the Upasanas (worship).

Since the Vedas are the Source of knowledge both scientific and spiritual, also mundane and heavenly, they are the eye and light for life.

Study and teaching of Vedas

The teaching and study of Vedas, and their transmission has been assumed since the 2nd millennium BCE with the help of elaborate mnemonic techniques. There was “Guru-sishya parampara” ie “the tradition of teacher- disciple” where disciple used to stay in with Guru (teacher) with full of devotion and service for Guru.

There are unlimited knowledge and information in Vedas. The most ancient part of the Vedas are mantras which are recited in the present age for phonology and semantics. Their phonology are treated to be “primordial rhythms of creation”, and pronounced through the mouth of God. Vedas recitation regenerates the cosmos which inspirits and cherish the forms of creation at their foundation.”

The several Eastern philosophies and Hindu delineations have taken distinguishing stands on the Vedas; schools of Vedic philosophy that enter upon the primordial authorization of the Vedas are deal out as “orthodox” (āstika). While some śramaṇa traditions, like Ajivika, Buddhism, Carvaka, Jainism, Lokayata, which consider the Vedas in various ways.