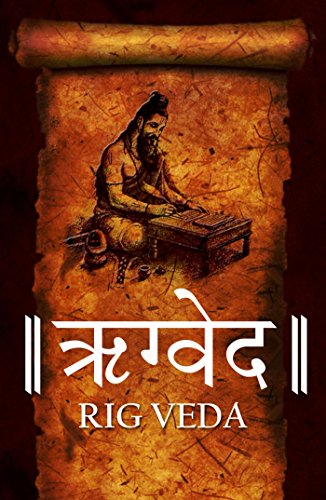 Among the four Vedas, the Rig Veda is the oldest one. It composed of hymns which are believed to have been composed between 1500 and 1000 BCE. The Hymn of Creation in Rig Veda reveals the cause of the creation of the universe, which is explained as a mystic, occult, and even unfathomable course of action. It is a large collection of hymns in praise, the prayer of the various demigods caroled in different rites. Since the 2nd millennium BCE, The mantra and sounds of Rigveda have been verbally transferred for the learners. The substantial testimony linguistic witness alludes that the expansion of the Rigveda was inscribed within Nepal and northwestern India.

The text of the Rig Veda is tiered with the Samhita, Brahmanas, Aranyakas and Upanishads.  The Rigveda consists of 10 books (maṇḍalas) with 1,028 hymns or ode (sūktas) in about 10,600 verses (eponymous). Among 10 mandalas, in the eight Mandalas – Mandala 2 through 9 – that was indited earliest, the odes primarily talk on cosmology and extol deities. Mandala 1 and Mandala 10 concern with platonic and philosophical questions, decorum like charity (dana), virtuous deeds, etc., interrogation regarding substantive of the universe and divine nature, also metaphysical affairs.

We can find some verses recited in various rites, celebration, wedding, prayers, etc.

The entire Veda is in Sanskrit. The Rig veda is the most pristine than other eastern texts. Thus, it was given more priority by western scholarship since the times of Max Müller and Rudolf Roth. The Rig veda has the records primitive phase of the Vedic period.

The Rig veda has no discernible indorsement of the social or political channel in the Vedic epoch, whether normal or extraordinary. Simply indications like livestock raising and horse racing are noticeable, and the book puts forward mediocre thoughts about the archaic Nepali and Indian community. We did not find any proofs about higher caste and lower caste though there was a division of caste system, which helped for the division of work according to their nature. The society seems to be semi-nomadic and pastoral with proofs of husbandry as hymns depicture plow and solemnize farming godhood.

It shows labor division, and interdependent relationship between kings and poet-priests but no talks of social classes’ status. Females in the Rigveda seen contrasted as orators in conversation psalm, both as mythical or providential. They are utterly cheeky outspoken and seem more voluptuously persuaded than males, in the writing. Extensive and aesthetical panegyrics on marriage evince rituals of the path that had formed during the time of Rigveda. There is a bit of proof of dowry in a few cases and no proof of sati neither in Rigveda nor in other Vedic literature.

Some of the eulogies in Rigveda states rice and porridge, like in hymn 1.61, 8.70, 8.77, and 8.83. The Rigveda indicates the word áyas (metal), but it is obscure about its type and its detailed information. Scholars are unable to find iron in Rigveda. Eulogy 5.63 refers to “metal mantled in gold”, which shows metalwork had sledding in the Vedic civilization.

Many words in Rigveda has similar roots with terms from other Indo-European languages while it contains some of the names of gods and goddesses among other belief patterns rooted in Proto-Indo-European culture. Nevertheless, a Vedic and Sanskrit literature pedagogue Frits Staal mentions nearly 300 words in the Rigveda are neither of the Indo-Aryan and Indo-European. Many of these 300, like- kapardin, kikata, kumara, kumari, etc. have Austroasiatic roots arrive from proto- Munda or Munda languages available in the Asami province (eastern and northeastern) of India, and eastern Nepal.

The rest of the 300 words – like nir and mleccha – are found in the southern area of India, with Dravidian language roots which have the origin from Tibeto-Burman.  Few words like camel, donkey, mustard which are not from the Indo-European language probable to lost the Central Asian language.

Composition of the Rig veda

In each book from the “family books” (2–7) contain odes by members of the identical clan. These books are linked with several kin, clans, and headmen. Other kin and clans are also depicted in the Rig veda. These family books are connected with the distinct provinces, and make mention about famed Pūru kings and Bharata.

A rishi (the composer) is represented in each of the verses of the Rig veda by the Tradition. Single composers attribute most sūktas; for each of them the Rig veda. They comprise a pedigree-specific āprī hymn (a particular sūkta of the dourly predictable pattern, used for the ceremony). More or equal to 95 % of the hymns account for ten families of rishis in total.

Members of the early Kuru descendants codified and organized the Rig veda in the Rigvedic period. The hymns, coetaneous with the creation of the Samhitas (younger Veda), were compiled including the convening of each hymn in ten books, for codifying the Rig veda. Witzel states that the beginning collection came to pass after the Bharata conquest in the war of the Ten Emperors over other Puru emperors, under emperor Sudās.

This collection helped to unite several groups in the clans which were reconciled in the Kuru realm under a Bharata king. This amassment was re-systematized and inflated in the Kuru reign, exhibiting the formation of a novel Bharata-Puru family tree and novel srauta ceremonial.

During the later Brahmana age, in around the 6th century BCE  the Vedic chant was fixed by imposing customary operation of sandhi and of the padapatha (by diffusing Sandhi out of the previous metrical content).

The Rig veda is structured in ten “volumes”, or mandalas (“circles”), in different age and length.

The collection of hymns (Sukta) form each mandala. Sukta= Su+ Ukta where “Su” means well and “Ukta” means recited. Sukta is a well-recited eulogy focused on varieties of rites and rituals. The suktas are made up of distinct stanzas of praise, which are in addition broke down into sections of verse known as pada (step or foot).