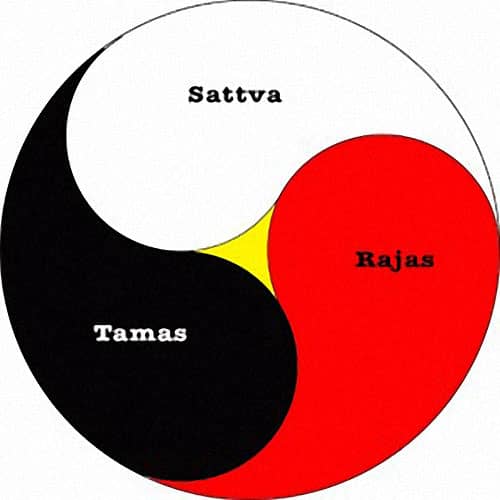 In the yogic philosophy, there is a common notion that almost everything that is composed of this universe is made up of some of the basic things called nature. Likewise, nature, which is also called Prakriti, has three major qualities, which pops out from things like energy, matter, and consciousness. In this article, we delve into the concept of trigunas ( sattva, Rajas and Tamas guna)

The quality of trigunas or energy can further be divided as Sattva (beingness and peace), rajas (activity and passion) whereas tamas (darkness and chaos). By simply manipulating the gunas helps you to plummet the stress, anxiety, agitation inside the mind, which is manifested in the body, and rise the inner power such as peace, love, harmony that leads you to the god-like character.

Ayurveda has lucidly explained the characteristics of people based on psychology (Manasa), constitution (Prakriti). However, the genetic factor plays an important role in determining the psychological characteristics of the human being. The manifestation of such is contingent on the dominance of one guna over another. It is common for an individual to have a mix of trigunas in their life. Nevertheless, the gunas, which is predominant, determine the character that gets manifested in the surrounding.

A healthy state of mind is achieved by maintaining the harmonic relationship with the different gunas. If there is any disharmony in the state of mind then it is obvious that the person will suffer from some sort of anomaly be it a physical health disorder or the mental disorder.

In the yogic realm, sattva is considered the highest quality of trigunas, which however is not easy to attain. One needs to practice a lot to attain the sattva. In the state of sattva, one is utterly in harmony, peace, joy, and intelligence. The individual who has attained Sattva’s character is also free from any sort of physical as well as mental misbalance. The seasoned yogis mostly attain it. Nonetheless, karma yogis also attain the state, but it is nothing but tough to preserve the state for a longer period as they are swayed by the action they have to perform the whole day.

Some of the Sattva characters that a person has are a delight, compassion to others, joy, fulfillment, cheerfulness, dauntlessness, harmony with nature, blissful, empathy, self-denial, focus state of mind, selfless service to the humankind, etc.

The Sanskrit meaning of Rajas is king. Among the concept of the gunas, it is regarded as the most active gunas among trigunas and is characterized by motion and stimulation. One with the Rajas characteristics are much ambitious, is vacillating from one thought to another, are sometimes lazy, but not all the time. Have a mixed feeling of euphoria, stress, anxiety, worry, restlessness, stressed, fearful, ruminating over bad thoughts, and past thoughts. The person with a rajas character gets attracted to the physical entity, they pine for a better future and get attached to the materialistic things.

Tamas characteristic which bogs the people down

Among all three trigunas, Tamas is the baneful characteristic a person holds. It is usually characterized by the heaviness that bogs the people down. Tamas’s characteristics produce various maladies in person that include laziness, apathy to the stimulus, lethargy. Tamas erupts from the ignorance to the knowledge and that sways the person away from the spiritual path. Some of the peculiar tamasic characteristics are helpless, doubt, guilt, boredom, addiction, dependency, and ignorant of the truth.

Tamas dosas arise due to the unbalance in life, unnecessary stress that springs up from the negative thoughts of lust, attachment, fear, anger, malice, and anxiety. However, all the dosas can be placated by practicing yoga and meditation on a regular basis.