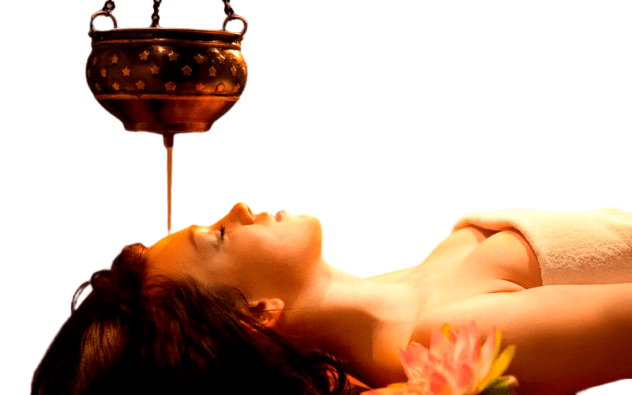 Ayurveda treatment procedure of Shirodhara is one of the most widely used therapy for the management of mental stress. Etymologically, Shirodhara is made up of two Sanskrit words shiro meaning head and dhara meaning continuous flow of stream.

So, practically it is a therapeutic process of pouring warm medicated oil in a continuous flow of stream from a certain height on the forehead of the recipient for clinically specified period of time.

From the perspective of Ayurveda, mental diseases are in close relation with Vata, one of the fundamental doshic component of the body. Vitiation of Vata is considered to be the primary cause for origination of any kind of mental disorder.

Vata is considered to be alleviated by oleation therapies as the qualities possessed by oil and vata contradict to each other. So shirodhara in Ayurveda has been practiced under oleation therapy for a long time with the purpose of pacifying aggravated vata responsible for causing mental illnesses.

When to have it?

Other than these, shirodhara can be recommended for general relaxation purpose too. It can be added as an additional therapy in meditation practice to achieve quick results in increasing awareness and attention.

There are few cases in which shiro-dhara cannot be recommended which are as follows:

In high grades of anxiety, the patient must be counselled properly and then only therapy should be given.

How is Shirodhara given?

The recipient is made to lie on the Shirodhara table on his/her back. Gentle oil massage is given on the head or if required on whole body. The medicated oil is warmed alongside. The vessel from which continuous flow of is to be poured is positioned just above to the recipient’s forehead.

The vessel has a hole at the center through which the oil leaks out. A cotton plug is placed in the hole to control the flow of the oil. Ideally, the distance between the recipient’s head and the hole of the vessel is about 4 angulas (four fingers).

When medicated oil is warmed up to appropriate temperature, it is poured in the vessel. Cotton gauge are placed over the closed eyes of the recipient to prevent the entry of oil into the eyes.  The cotton plug is opened and continuous stream flow of oil is made to fall upon the forehead.

Oscillatory motion is provided to the vessel such that the flow could cover whole area of the forehead. A minimum duration of half an hour is recommended for an effective therapy.

After the completion of procedure, recipient is made to sit comfortably on the table and oil on the head is cleared properly. Then s/he is asked to take warm water bath after half an hour.

How does it works?

Scientific studies on shirodhara in Ayurveda have concluded on a common hypothesis for the working mechanism of this therapy. Oil poured on the forehead produces mechanical stress waves and induce neurological signals through stimulation of tactile and thermo-receptors.

It is also speculated that some areas of frontal lobe and limbic system are also activated due to this therapy. Both of these phenomena provoke the release of endorphins and serotonin. At the same time constant soothing pressure of forehead is going to lower the sympathetic tone.

Ultimately the effects that are seen and which have been documented by the scientific studies are as follows: