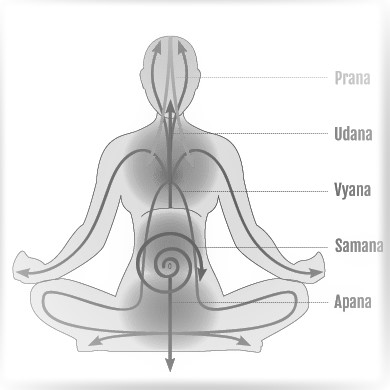 We all are guided by the idea that yoga is a tool that unifies the human mind with the supreme entity. We are so caught up in achieving this destiny that we fail to comprehend the core ideology involved in prana Vayu. Do not fret as in this blog, we shall take a look at Pancha prana in human body and its importance.

The word ‘Prana’ comes from the Sanskrit word ‘Praan’. The prefix ‘Pra’ refers to constant whereas ‘An’ means movement. When we merge these two words, we get the word ‘Prana’ meaning the continuous flow of life energy or vital energy. This energy commences from our birth and lasts till our death.

Another school of thought defines prana as a unit of life that causes the fluctuation of breath in a living person. This energy is well-hidden inside all of us. Many believe that prana is superior to other senses in the human body. Thus, it is crucial to comprehend Pancha prana in human body.

2. WHERE DOES PRANA COME FROM?

As per Hindu mythology, Prana comes from the human soul or ‘Atman’. The soul experiences the physical world via prana. In every action that you do, prana is prevalent. Whether you are breathing through the nose, observing by the eyes, or thinking, prana is there.

Prana falls under five categories depending on their functions and working areas. Each type of prana plays a crucial role in the proper functioning of the human body and mind. The different types of pranas are as follows:

Prana Vayu is the initial pranic energy that makes the human body. Normally, it flows upwards but on rare occasions, it can move downwards too. It lies in the Ajna chakra which in turn lies between the elbows. Likewise, prana Vayu is responsible for the working of the respiratory system. In the same way, it helps in various physiological and psychological activities too.

This Pancha prana in human body is red and works from the diaphragm to the throat. If you wish to accentuate your prana Vayu, then you should practice yoga asana that prioritizes the chest. For example, bridge pose, camel pose, and bow pose.

Apana Vayu flows in the exact opposite direction of Prana Vayu. It flows downwards and is said to reside in the Muladhara chakra. The major function of this chakra is to eliminate waste products from the body like urine, feces, and gas. Other than that, it helps to maintain sexual arousal and women’s menstrual cycle. Similarly, the Apana Vayu calls the kidneys, large intestines, and urinary system it’s working area.

The Apana Vayu is a blend of red and white. If the Apana Vayu is in disequilibrium, then the body faces problems like lethargy, itching, and diabetes. This Pancha prana in human body becomes better by practicing yoga asanas like locust pose and tree pose.

The Samana Vayu doesn’t flow in any direction but rather works on the ‘fire’ element of the body. It enhances the Manipura chakra and works between the Prana Vayu and Apana Vayu. Also, it helps in balancing the heat that built in digestion.

This Pancha prana in human body works at the navel and has a shining color. If the human body sees disturbance in the Samana Vayu, then appetite problems tend to occur. To prevent such problems from happening, then you should practice asanas like bound angle pose, and tree pose.

Udana Vayu is white and imbalances in the Udana Vayu causes vision-related and hearing problems. To accentuate this Pancha prana in human body, you must perform asanas that focus on the shoulders and head. For instance, fish pose, shoulder stand, and bridge pose.

The 5th prana in human body is Vyana Vayu. It is a bit complex and goes through different organs via Nadi. The purpose of this Vayu is to transfer nutrients to different body parts. Unlike other Vayus, it does not have a specific working place as it flows throughout the body. This Vayu has a color similar to that of light rays.

If this pancha prana in human body witnesses’ disturbances, then it causes muscles to tighten. Also, it leads to problems in the sensory neurons. To keep this prana in check, then you can practice poses like eagle pose and half-moon pose.

We hope that you now have a thorough idea of what prana is and its benefits. If you have any queries, feel free to ask us.