Lord Vishnu- The Protector of Universe 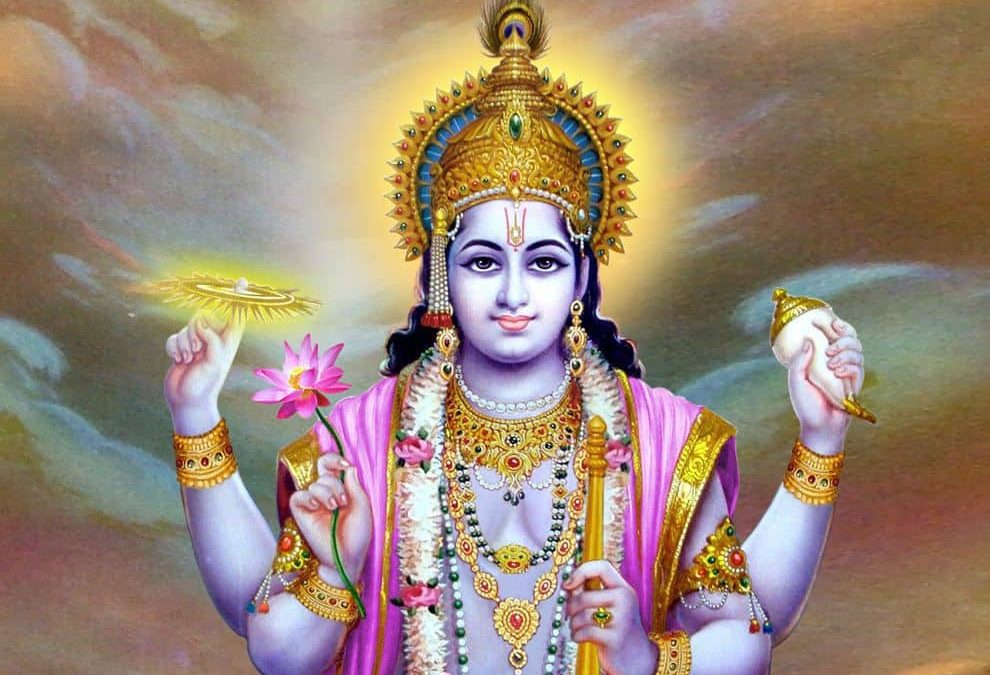 Lord Vishnu is one of the supreme deities of Hinduism. Hinduism is polytheism, therefore there are many deities and gods there. Hinduism has the greatest number of gods and goddesses in any religion in the world known today. Lord Vishnu is one of the three holy trinities of Hinduism. Hinduism has three gods that are above everyone, even the elemental gods. The three have a unique sacred duty to the universe and due to this duty, the universe functions.  Lord Brahma is the creator of the universe, Lord Vishnu the protector whereas Lord Shiva is the destroyer of the universe.

The appearance of Lord Vishnu

Some scriptures, texts, and stories define Lord Vishnu as the supreme energy of the universe that has no form and limit. The energy is beyond the limit and cannot be comprehended by the human eyes and the human mind.  However, Lord Vishnu is mostly depicted in his chaturvuj form.

In his most depicted form, the lord looks like a human with blue skin. He has four arms and each of the arms holds something that is a dear or integral part of the lord. The raised hands of Lord Vishnu hold the eternal disc Sudarshan and the conch Panchajanya. The lower left-hand holds the Kaumudiki mace while the right hand is always in the giving gesture of boon position.

Lord Vishnu wears the golden jewelry in his body and wears golden clothes. He is always residing in his bed that lies in the eternal cosmic sea and is made with the body of Seshnaag. Seshnaag the hundreds of thousands headed snake who is the greatest devotee of the lord makes the bed with his body so that the lord could sleep and rest on it. On the snake bed of Lord Vishnu, he is always seen with his concert goddess Laxmi. Goddess Laxmi is always at the side of Lord Vishnu in most of his depiction.

This is the most known form of the Lord. There are many forms where the lord appears to be very different and in some unrecognizable. The lord also takes many reincarnations as humans or animals further altering his appearance and form. However, Chatur vuja form is still the form, which is used in idols, pictures, paintings, recognizing and imagining Lord Vishnu.

All the gods and goddess in Hindu mythology has one or multiple animal companions who represent them or they reside on the back of those animals. Garud is a bird-like being that carries Lord Vishnu in his back. Garud is a very strong bird that’s strength and power are unparallel. He is the sworn enemy of the snakes and snakes tremble even at the name of the mighty Garud. He has a powerful beak, with two sets of powerful wings. The wings make him fly at the lightning speed from one place to another. It is said that Lord Vishnu resides at the back of mighty Garud when traveling from one place to another.

Goddess Laxmi is depicted as a beautiful woman wearing a red dress covered in Jewelry. She holds a lotus in one hand and gifts wealth and prosperity with her right hand. She is worshipped for prosperity, wealth, happiness by human beings. To run and protect the universe, wealth, materials, and equipment are needed. So, these two roles are fulfilled by the god and goddess as the husband and wife.

Creation of the Universe

Lord Vishnu has a very flexible character. He is often depicted as a charming man who can enchant everyone with his magic and charm. Lord Vishnu existed before time and everything and as per the mythology, he will be here when everything in existence succumbs to time and new life and universe will rise in its place.

The universe begins when Lord Vishnu awakens from his Yog Nidra. Before the creation, Lord Vishnu is in eternal sleep. However, when the time of the birth of creation comes. The lord orders Devi Yog Maya who is residing in his eyes and making him sleep to let him open his eyes. When the lord awakens the birth of the creation begins. From the navel of the Lord emerges a lotus from which Lord Brahma comes out and begins to create the universe as we know it.

In the beginning, there was nothing just the vast space. Then the supreme god Brahma started the wheel of creation. First, he created the elements, then one after another from the elements combined to form the nonliving aspect of the universe. One after another planets, celestial bodies, and other things started coming into existence. Then was the turn to create life. Lord Brahma then created life and one after another everyone and everything in existence were created.

The character of Lord Vishnu

Among the three trinities, stories say that is the one to least likely to give the boon that will tilt the balance towards Adharma. He is the one to preserve Dharma at all costs. Lord Vishnu is described in stories as an extremely charming personality that can awestruck everything and everyone. He knows when to use brute force, when to use the cunning trick and when to use its unparallel charm.

Stories tell that he always gets what he wants by hook or by crook. His main goal is to protect and run the universe while preserving Dharma and the righteous peoples. Stories show that he can do everything to complete his duty.

Lord Vishnu when must ensure the victory right ones, can trick the evil ones to their destruction. He had used a trick and his charm to destroy many evildoers who avoid the path to dharma and were protected by the boons granted by the gods. When Lord made his move towards restoring Dharma, be it a demon, asur, rakshasa, or even gods no one could stop him from fulfilling his duty.

As described by the Hindu scriptures the concept of the Dharma and Adharma is as old as the creation itself. When a Living being, deity, consciousness, or element follows its true nature and fulfills its duty to the universe it follows its Dharma. Even the non-living has their Dharma.

The Dharma of the sun is to give life and light to the earth, the Dharma of rock is to be strong, the Dharma of food is to satisfy hunger. Whereas the Dharma of humans is to always follow the path of righteousness and truth as shown by God. Whenever, one does not follow his duty and drifts towards evilness, hate, and giving pain to others it is called Adharma. When Adharma comes to its peak and Dharma is sidelined Lord Vishnu is the one who intervenes and places Dharma at its rightful place.

The time as per Hindu mythology is divided into four Yug’s. After the fourth one, the cycle repeats. In all these four Yug’s when Adharma reaches its peak and righteous people will be marginalized then Lord Vishnu will incarnate in the earth to protect the good ones, destroy the evil ones and establish a system of good and righteousness. In this period the Lord will take 10 incarnations which collectively is known as the Dashavtar. These avatars ranged from those were taken at the beginning of the first to the end of the fourth one.

Matsya, Kurma, Varaha, Narshima, Vamana, Parashurama, Ram, Krishna, Buddha and Kalki are the total ten avatars of Lord Vishnu. These ten are in the chronological order in which the Lord incarnated. They all are worshipped separately in their accordance aside from Lord Vishnu also. All of them were incarnated on this earth with a special duty to fulfill. It is to protect something or destroy someone. It was always a cosmic duty for which they arrived at the earth. They appeared for a special purpose, completed the duty, and returned leaving the earth. Matsya was the first incarnation of the Lord while Kalki at the end of the Kaliyuga will be the last.

Among the ten avatars, six are in humans while the four in animal form. Matsya is fish, Kurma is a turtle, Varaha is wild boar, Narshima is half lion and half human beats, while Parshuram, Ram, Krishna, Buddha, and Kalki are the human avatars.

Ram and Krishna are the most known, worshipped, and prominent forms of Lord Vishnu. Lord Ram was born in Treta Yug as the son of King Dashrath in the kingdom of Ayodhya. Lord Vishnu incarnated as the brave warrior, virtuous man, kind king to establish Dharma in the form of Lord Ram. Bow and arrow were the weapons of choice of Lord ram and with these, he killed many demons. When mother Sita wife of Lord Ram was kidnapped by Ravana. He waged a huge war defeating Ravana and many demons along the way.

Lord Krishna was the eighth avatar of Lord Vishnu who was born at the Dwapar Yug It is believed that when Lord Krishna died the Kali Yug begun. He was born at a prison to his father Vasudev and Mother Devaki. He was later transported to Vrindavan where he grew. Then he returned to Mathura where his parents were imprisoned and kill Kansa who did that to them. From childhood lord, Krishna killed many asuras and demons who disturbed the balance of Dharma. Mahabharat also took place in the period of Lord Krishna. He did not officially take part in the war but was the one to guide Pandavs to victory.

Among the incarnations of Lord Vishnu Parshuram is the only one who is alive today. Parshuram was born on Treta Yug and is believed to be still alive today. When the last avatar of Lord Vishnu will be born, he will also be one of the teachers of the avatar. He is one of the greatest warriors to have lived and was taught the art of fighting by Lord Shiva himself. He is known for his anger, rage, and big axe which he received from Lord Shiva.

As per Hindu mythology, we are currently at the fourth Yug It is the last Yug in the time cycle and is known as the Kali Yug. At the end of Kali Yug, when the evil persons, vile behavior will

be at peak, then Lord Vishnu will incarnate as Kalki and save the world.

To kill a demon Jalandhar, Lord Vishnu disguised himself as him and tricked his wife Brinda. Later, the demon was killed by Lord Shiva. Angered by the death of her husband she cursed Lord Vishnu to be stone, grass, and tree. So, Lord Vishnu is also worshipped as Saligram (a kind of fossil stone), Pipal (Tree), Dubbo (grass).

Nepal also has many temples dedicated to Lord Vishnu. The giant statue in Buda Nilkanta, Krishna mandir of Patan, Mukti Nath, Ram mandir of Janakpur, Changu Narayan, Bishankhu Narayan, Sesh Narayan, Ichangu Narayan are some of the most popular temples of Lord Vishnu and his incarnations.