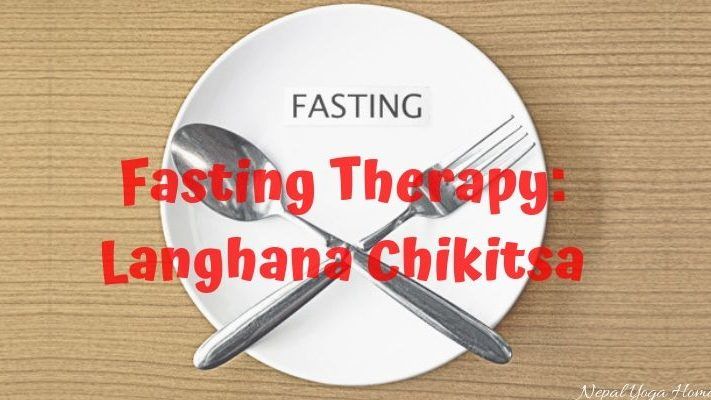 Our body is an engine which is designed to work for a definite period of time. Like we make sure that our bike engines make a proper rest and reuse it for the better efficiency of it, our body also requires the rest. Rest is one of the positive factors for well-functioning of the Gastro-Intestinal tract. The diseases caused by Amadoshas (metabolic toxins) are described by the Apatarpana chikitsa (fasting therapy)in Ayurveda. Vagbhata-one of the major scholar of Ayurveda- classified the state of metabolic toxin due to incomplete digestion which results from poor digestive fire strength into three types and Indicated separate treatments.

According to Chakrapani, in a condition of ama dosha, an asana Roopa langhana has been advised. The abstinence from ahara, give a sort of relief from agni by not putting an additional load on it. By that agni rejuvenates its capacity and slowly it tries to digest the ama which is held before it. The langhana karma causes lightness in the body and removes the firmess, heaviness, laziness caused by Ama. The ama dosha is also disease, which is to be treated by langhanam. Apart from this, the langhana karma is specific in the conditions where ama entered in the circulation.

According to the experiments conducted on fasting therapy on rats at the centre for cellular and Molecular Biology, India, the belief is scientifically true. Intestinal cells absorb more from the reserve food available in the body during starvation (upvasa).

Reserved food is stored in the body either as glycogen or fats. Glycogen, a polymer of glucose is stored in the liver and during non-availability of food certain enzymes break it down into glucose, which provides energy to the body. The membrane cholesterol level goes well, and a dedicated sense of purpose. Evidence is also presented to explain an unexpected bonus from fasting- the increased production of growth hormone (HGH) by the pituitary gland which helps to retard the ageing process.

For most people, fasting therapy can be a revitalizing experience, restoring energy and clear mind, as well as helping to remove a host of minor symptoms, while encouraging the self-healing mechanisms of the body to regenerate and rebuild a level of wellbeing you have probably all but forgotten.

The benefits of fasting in the treatment of diabetes were first revealed in research conducted by Dr.G.Guelpa in 1910, and in 1915 Dr.F.Allen showed that fasting therapy could normalize the blood sugar levels of a diabetic, as well as improve associated gangrene. Since then studies into this particular therapeutic potential of fasting have continued.

Clinical trials showing now patients with epilepsy can be helped by fasting controlled fasting was found to reduce the length, severity, and a number of seizures. A great deal of research has verified the value of fasting in the treatment of heart disease and high blood pressure. In the 1960s and 1970s, a host of reports appeared in the medical press on how fasting had been shown to reduce the undesirable fats in the bloodstream, to lower high blood pressure, to reduce cholesterol levels, to bring about improvement in cases of atheroma and to alleviate congestive heart failure.

Chemical toxicity has been successfully treated using fasting therapy. For example, when toxic cooking oil containing the rice oil contaminant PCB was consumed, patients were reported to have relief from their symptoms, sometimes dramatically so, after between seven and ten days of fasting. Patients with those conditions known as auto-immune diseases, which include lupus, ankylosing spondylitis, rheumatoid arthritis, glomerulonephritis (kidney disease) amongst others, have shown marked benefits when fasting has been used in their treatment.

Thus, Langhana or fasting therapy of Ayurveda is considered to be very beneficial when done under the guidelines of Ayurveda Physicians. Proper consultation of diet, period along with Dos and Don’ts should be taken care which can be available at Nepal Ayurveda Home.