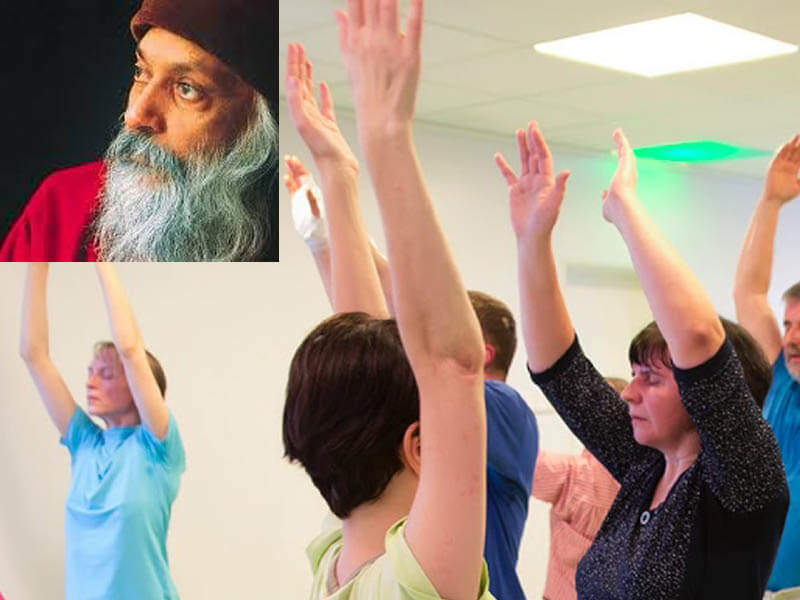 Dynamic Meditation is a method of meditation wherein physical action and mental awareness are combined. This form of meditation was observed during the early 1970s in Osho’s descriptions. It is active meditation which tries to eradicate psychological catharsis and purify the mind.

The meditation includes movements like ‘Sama’ and Hadra among the Sufi mystics which are also understood as Gurdjieff movements. The founder of Sama is credited to a Sufi master Jalāl ad-Dīn Muhammad Rūmī, the originator of Mevlevi Order.

Body Awareness is a part of Dynamic Meditation, was evolved in France by an artist and anthropologist Martino Nicoletti and other holy dances. Qigong and the many exercises raised in Taoism, Buddhism, the Latihan Subud, Tantra, and Yoga have played a vital role in the development of Dynamic Body Awareness.

Dynamic meditation is the most active methods of meditation to get into awareness state, alone connected to everything around you. It takes an hour to perform the five stages. Each stage is noticed by music. Eyes should be closed throughout the meditation.

It can be done alone or in the group. Practicing meditation early in the morning and with an empty stomach is the best. It is better to wear loose and comfortable clothes during meditation.

The first stage activates your divine energy through intense breathing which purifies from catharsis to make like an empty vessel and take to deep mind heart which makes capable reverberate the mantra ‘Hoo’ inside very sharply that your Kundalini energy (the divine sleeping energy) awakens and rises to supreme neutral centers. This brings the tranquility of mind, silence, bliss and makes you feel connected everywhere. It develops alertness and consciousness.

In history, there was some meditation technique similar to Dynamic Meditation technique in different parts of the world. Haruchika Noguchi from Japan developed “Katsugen undo (regenerating movement exercise)”, a Seitai exercise wherein one lets go of conscious control of the body and allows to restore and heal itself.

There was a similar technique in China called Zifagong, Re-do and Zi Ran Qigong.  There was a spontaneous and impromptu practice called “Mevlevi Dervish” or “Sufi whirling” in Iran and Turkey. There is an adage behind this impromptu practice- Rumi was walking through the mart. He heard a rhythmic hammering of the goldbeaters.

It is said that Rumi heard dhikr, “la ilaha ilallah” which means “no God but Allah” in the beating of the gold. This happened to stretch out both of his arms and spun in a circle. The practice of Sama and the dervishes of the Mevlevi order were born with the spinning of Rumi. These things are said to be the base of Dynamic Meditation.

It is difficult for many modern people just to sit and enter in meditation due to catharsis. So, the first thing is to be free from the catharsis. Osho says, “I never tell people to begin with just sitting.

The insane and random dance leads to be aware of a silent point within you. But silent sitting makes you aware of madness.” He used “dialectical” methods alternate activity and passivity, accommodating shaking of the body, dances, mantra and pranayama, latihan, kirtan, and psychotherapeutic catharsis.

The key of Dynamic meditation is irregular and intense breathing. Chaotic and intense breathing through the nose without any rhythm and pattern; and constant concentration on the exhalation helps to develop awareness if every activity is done consciously. No need to take care of inhalation, the body itself does it.

Breathe from the belly i.e. breathing should be abdominal. The breath should flow deeply into the lungs as fast and as hard as possible. Continue it with high speed until you precisely become the respiration.

Natural body movements help to build up the strength for wanton and speedy breath. You can move or shake your limbs and body to accelerate the level of irregular breaths.

Here is the explanation of the 2nd stage of Osho Dynamic Meditation:

Fulminate…. explode….throw everything out which are not necessary for the body. Let your body free, give it contrariness to express whatever is there and follow your body.

Bellow… trumpet… shout… jump… leap… cavort… shake… throw yourself around… lie down and roll your body… kick… sing… dance… laugh… do everything freely. Hold nothing back; feel no block. Shout from the belly and express the feelings of anger, hatred, craving, attachment, jealousy, grief, etc.

Express all the repressed emotion with full power. Keep moving your entire body. Do not let your mind to interfere with what is being happened. Just be mad consciously and totally. Be full and complete.

It is for hammering the first chakra. Jump up and down pronouncing the mantra, “Hoo!, Hoo! Hoo!” as deeply as possible with raised arms above the head. You can bounce if you feel more comfortable than in a jump. Let the mantra shingle or beat deep into the sex center, each time you land on the flat of the feet. Pass out all you have. Round out yourself totally.

Silent version: If there is any problem to make a noise, the third stage can be done silently as well. It means the mantra ‘Hoo’ can be hammered silently inside.

4th stage of Osho Dynamic meditation is to stop and observe yourself.

Stop!  Steadily fix your body unmoved whatever you are, in the position where you can find yourself. Don’t arrange your body rather stop it without any arrangement in any way. A movement, sneeze, anything, will waste the energy flow, so the struggle will have vanished. Be an observer, a witness to everything that is being happened to you. Judge nothing, just perceive and feel objectively.

Solemnize! Express yourself with music, dance whatsoever is available there Try to hold your aliveness throughout the day. Carry your blissfulness whole day and flourish the wave of happiness everywhere you go.  Try to remain happy and healthy.