Advaita Vedanta and Its Basic Principles- Philosophy Of Non-Duality 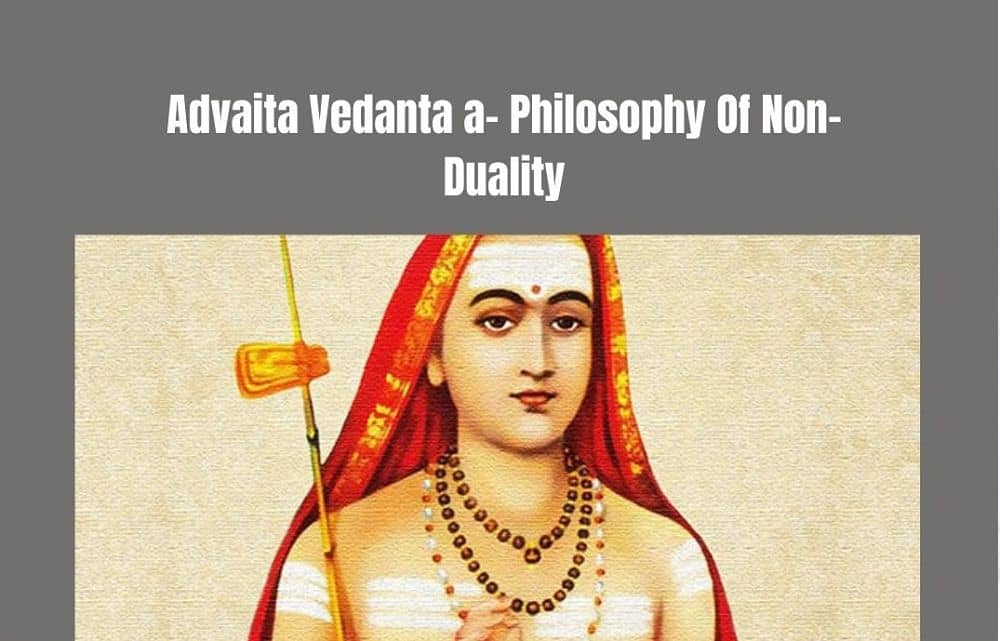 Hinduism is a mystery to all scholars. There is no definite rope that binds tradition or the path that paves out the road for tradition. The religion that is mostly followed in the southern part of Asia is the subject of study and interest to many. Looking at Hinduism, it is one of the oldest religions in the world currently.

There is no exact estimation of who or where started the practice of Hinduism. Practice has survived and went through thousands of years. During this period, the main branch of Hinduism got divided into many sub-branches. They originated from the original route but their ideology and practices and very much differ from the original path. Advaita Vedanta, Dvaita Vedanta are some of the major ideologies and philosophies of the various branches of Hinduism.

Hinduism is a remarkably diverse religion. The element that fuels its diversity is its acceptance of the wide range of philosophies. The people who accept Hinduism do not necessarily need to accept all the philosophies and practices. Also, they do not need to follow the hierarchy of gods of the main Hinduism. There are few subgroups that follow their own hierarchy of the gods and do not consider the other systems.

Let us focus on the ideologies more than the gods as it is the main factor that distinguishes the various groups from others. The arising of many ideologies is believed to be the chronological effect of time. First was the main branch, then with time a separate set of ideologies arose which resembled the original but differed in certain ways. With more time increased ideologies rose. Some from the main branch, while some even arose from the side branch also making their own subgroups.

Since the ideologies originated at various times, it is natural for some of them to be remarkably diverse from one other. Some have ideologies so alike that one needs to research very find any kind of difference between them or they are not so different in their core beliefs. Some are so diverse and have different ideologies that it is hard to tell them the ideologies of Hinduism. Advaita Vedanta, Dvaita Vedanta, Vishishta Vedanta. Vedanta are all examples of the diverse ideologies that exist within Hinduism. There are other many also some in such a minority that mostly no one knows about it and few people are there who follow them.

It is one of the oldest philosophies of its kind to exist. There are traces that the ideologies of Advaita Vedanta or similar ideologies that existed thousands of years ago. However, the most prominent and trustworthy elaboration of the ideology can be found in the late 8th century. There was a sage that lived at the time and is believed to be the one who clarified the depth, meaning, and techniques of Advaita Vedanta. His name was Adi Shankara and was the greatest exponent of Advaita Vedanta. He gave the knowledge of the singular reality that exists in the world and gave knowledge of the truth of the world.

Adi Shankara was one of the greatest sages to have lived in the ancient Indian subcontinent. His most notable or the greatest contribution is in the field or dispersing the knowledge of Advaita Vedanta.

The birth of Adi Sankhara is a remarkably diverse topic as there are many scholars who have proposed various times with their various reasoning and their findings to support their argument and theory. 509-477 BCE, 44-12 BCE, 788-820 BCE, 805-897 BCE are some of the birth and death years of the great sage. There is a huge dispute about the birth and life period of the sage.

Various scholars with their study and research had proposed this various times. They are based on some archeological findings, scriptures, and other things. Looking at the biography of the great sage aside from the birth and death period they are also some sort of mystery and various versions exist which are supported by various scholars. They are at least 14 various versions of the biography of the sage that exist. However, whatever version of the biography may be one thing is clear and he is the one who gave the teachings of the Advaita Vedanta to the world.

Most of the sources claim that Sankhara was born in a Brahmin family. His parents were old couples who were childless till the time Sankhara was born. His father is said to have been dying at an early age. As morning shows the day, Sankhara was also very much inclined to the teachings of the Veda and scriptures and wished to live the life of the hermit.

At first, his mother strongly disagreed with him as walking the path of sage hood means staying away from the family and rejecting earthly pleasures. However, with the passage of time his mother also agreed on his quest to become the sage and Sankhara went on his journey to attain the knowledge and life that he sought.

Advaita Vedanta and its philosophy

Advaita means non-duality, and Advaita Vedanta is the philosophy of non-duality. It says that there is only one supreme being in the universe and other than that all is meaningless. It says that there is no difference between the subject and the object. In this world, we experience many things, one is the physical world, and another is the spiritual world. Many other ideologies perceive both the realities and other ideologies. However, Advaita Vedanta says that the appearance of the two and more than two natures, the difference between subject and object is also not true and there is one and only one thing.

God is the one who creates the universe when he wishes, maintains the universe till he wishes, and the universe dies only with his wish only. Everything in the universe, even the non-living things and mass celestial bodies like the planets, galaxies, solar systems are created by the god and are in existence through his and his permission only. The supreme god is the source of all beings, they are born through him and his desire. God is also their destiny and ultimate resting point as they will be returning to God himself.

Unlike the other ideologies, Advaita Vedanta calls the entire physical world Maya. It is called the non-dualistic ideology because it only accepts the ideology of a supreme being and completely rejects other reality and ideologies. Advaita Vedanta also rejects the world itself. According to Advaita Vedanta, the world is a giant Maya, and we are trapped inside this Maya. We can only move forward by rejecting this Maya and illusion.

Everything in this world is Maya and is keeping people away from eternal bliss. When people get closer or more attached to this earthly self, earthly relations further they will be away from the god. The world is something to be rejected and steps need to be taken towards the god himself and moksha.

The soul is the only real thing in this world of Maya and attachment. However, Advaita Vedanta only accepts the reality of the god, so why it also says that in this world soul is the only thing that is not Maya. This can make people with half knowledge very confused but there is a reason for it. According to Advaita Vedanta’s soul has no individual existence at all. It is never a part of this material world. It is only here for the time being.

Maya when translated to English becomes an illusion. Maya is used to describe the attachment that an individual has towards a certain thing or nature. Advaita Vedanta describes the entire world as Maya. The para-Brahma is real, the soul is real as it is the direct projection of the god himself, and other than that everything is an illusion. Maya in depth is the attachment of ourselves to the world. Every soul moves towards God and enlightenment. However, the soul gets distracted with attachment and worldly things.

The nature of the soul is to seek. It is always seeking something that will provide it with bliss and liberation. The ultimate god is the only thing that can provide eternal bliss according to Advaita Vedanta. However, the path is filled with world, worldly desire, a worldly attachment that will obstruct the path towards God and liberation. To completely cast out the Maya one must be able to cast away the world itself as all the constituents of the world along with the world itself is a giant Maya. According to Advaita Vedanta Maya needs to be cast aside and seen through to move forward in the path of spirituality.

Purushartha- The goal of human life according to Advaita Vedanta

Arta is the meaning. It can be anything that acts as the support to run one life. The ideologies and the consciousness are the Artha to life and dharma. People decide their dharma according to their Artha, ideologies, and beliefs.

The Kama is the pleasure and enjoyment. It is an activity of procreation as well as enjoyment.

Advaita Vedanta says that moksha is the key to feel the presence of projection of the supreme god inside of oneself. Moksha is the key to look beyond the physical body and physical self which completely is the illusion and the soul which is your true existence and connection to the god. When one completely understands soul (Aatma) and Brahma (The supreme god and only reality) they enter the state of liberation and obtain cosmic sense which simply is known as Moksha.

Advaita Vedanta says that one in their life knowing their soul and go can attain moksha and it is named Jivanmukti (The liberation in life). One who attains can see and feel the world in a new light. The way in which they have never seen and realized. The perspective of the world which can only be visualized by those who are in the plain of moksha.

Advaita Vedanta in other religions

Advaita Vedanta is accepted as an ideology to live by rather than a religion. It is the way of life that people believe to get their way to their soul and enlightenment. The ideology and philosophy are the reasons that Advaita Vedanta extends beyond Hinduism itself. There is no hierarchy of the gods, no this and that. There is one supreme soul which is real and no other thing except that is real. Everyone who has realized tries to move towards the ultimate existence leaving behind the false world and attachment.

This ideology and philosophy are the reason Advaita Vedanta and similar practices as it is practiced in the religions like Buddhism and Jainism. The ideologies transcend religion itself.