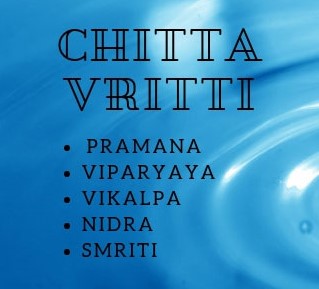 Vrittis in the simplest term is defined as the modification of the mind. Various types of thoughts spring up in the mind. In the yogic term, vrittis are called Antahkarana. Throughout the day, the mind revolves around various types of thoughts. In the yogic realm, it is evidently said about the five vrittis that thoughts are modulated due to Avidya. Avidya is also called being ignorant. Ignorance is destroyed by Jnana, Vrittis, and get adsorbed by Brahman or Laya. It is compared and contrasted with the absorption of liquid in the hot equipment be it pan or any other devices.

In 24 hours of the day, you are not only doing your mundane chores perfunctorily. You are also dwelling in the past or imagining the fruitful future. When you are not living in the past nor the future and enjoying the present moment fully then you are connecting with self in the form of yoga. At that, moment yoga happens automatically.

There is a definition of yoga incorporating five vrittis by Patanjali in the Sanskrit language, which goes “Chitta vrtti nirodaha”, which translates to “Yoga is the capacity to pacify/restrain/provide direction to the undulating thoughts of the conscious and subconscious mind”. At the “Chitta vetti nirodha” state the practitioner of yoga remains the true nature of themselves. However, it is prudent to know that how could one pacify the mind, body, and soul to ace the peaceful state of the mind?

Direct Experience: In direct experience, we use five senses. This can be gained either from going to formal education or learning from the environment.

Inference (Anumana): The process of deriving the reasons through valid logic to understand the things of ourselves. For example: If you see the water coming out of the drain, then you infer that water is overflowing from the drain.

Testimony from trustworthy sources: Many people are seasoned experts from which you can derive knowledge and understanding.

Sometimes there are instances where we base our knowledge on the misconception. The circular reasoning is based on the incomplete perceptions of the knowledge. For example, We may put the causation of the bad happening to bad luck, however, that might not be the actual causation, the actual causation will be our incompetence.

Imagination is one of the five vrittis, which is referred to as Vikalpa in the Sanskrit language. Imagination is evoked by various factors like words, concepts, and previous experiences. For instance: The feeling of hatred is evoked by past experiences with people. Likewise, each feeling that is evoked will be based on samskaras also known as impressions.

Nidra also is known as sleep, is one of the among five vrittis, which is achieved when we overcome the heaviness and we do not perform any sorts of activities at the present moment. In yogic science, Nidra is referred to the activities, which causes heaviness or dullness due to lack of inertia or movement. In contrast to the Nidra or sleep, consciousness is much relaxed and light; furthermore, when we are conscious we are in the active state too.

5th part of Vrittis is known as Memory or smriti. The Sanskrit term of memory is Smriti. The actions we perform in daily life are stored in the memory bank. It is the impression of the individual and is stored. When we rise from the slumber state, we do not know whether the memory is true, false, incomplete, or imaginary. Nevertheless, memories influence the activities we are performing.

If we hold the grudges and do not let go of the experience, we will hold such things deeply in the memory, and that ultimately manifests in our life in different forms.