Treatment Of Infertility By Uttar Vasti 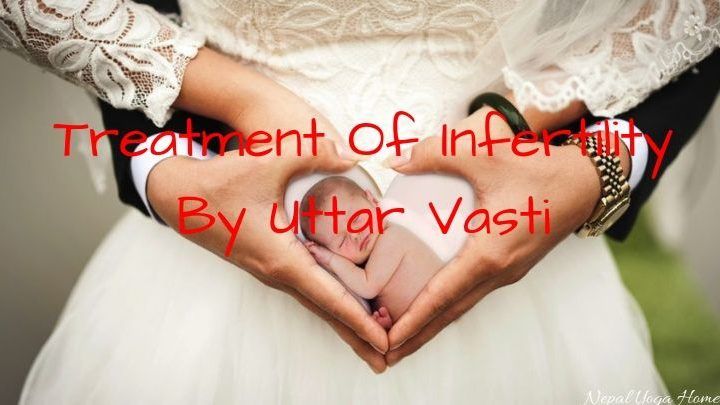 Infertility is “a disease of the reproductive system (Artav vaha Srotas) defined as a failure to achieve conception after 12 months or more having regular unprotected sexual intercourse.” The female factor is directly responsible in 40-55% among which Prevalence of infertility due to ovarian factor is 15-25 %, tubal factor causes 25-35%, uterine factor 10 % and cervical factor 5%.

In Ayurveda essential factors for healthy Conception are Ritu(Favourable Time viz. Ovulation Period), Kshetra(Site of fertilization), Ambu(Presence of Nutrition), Beeja(Male and female gametes); any vitiation in these factors lead to infertility. Hrdi Samyata, Anil samyata are also considered as essential factors. Here Anil Samyata is mainly considered as the normalcy of Apana vayu. Pitta ,kapha and other structures are lame without the action of Vata.

So, Vayu is considered as prime dosha among Tridosha, by controlling Vata, Kapha and Pitta ultimately come in its equilibrium stage Basti therapy (Medicated enema therapy) are propounded as the best line of treatment for vitiated Vata, Uttar Basti is described as chief procedure among Panchkarma to rectify Ovum related disorders. Hence keeping in mind the strong relation between the pathogenesis of Infertility with Vata dosha, Artav dosha and artav vaha srota dusti (female channel of reproductive organs) those are main causative factors in Ayurvedic perspectives. This clinical review study was conducted to evaluate the efficacy of Uttar Basti in the management of infertility caused by an anovulatory factor, tubal factor, endometrial factor and cervical factor. By Basti therapy, we can get an answer of unsolved causes of Infertility.

It is one of the types of Vasti karma (Medicated Enema) where the medicated decoction, ghee, oil are being processed through the Urethral route. The literal meaning of vasti means to hold –thus the medicine holds for a few hours and then it is thrown out. This can be done in both male and female, but moreover done in female especially done for tubual blockages in infertility and Gynaecological disorders.

Intrauterine Uttar Basti of 5ml of medicated oil/ghee once in a day given for 6 days from the day after cessation of menses for two consecutive cycles. Follow up period is of 1 month.

The patient is taken in dorsal lithotomy position, cleaning with an antiseptic solution is done and then the 5 ml medicated oil/Ghee is inserted with the help of Uttarbasti Cannula, while the anterior lip of the cervix is held with Allis’ forceps and the patient is kept in a head low position. Instruments are removed and the patient is shifted toward. She is kept in head low position for at least 2 hours for better absorption of the drug from the vagina and to prevent any vasovagal shock.

Some Medicated Preparations used in Pradhana Karma Procedure Are:

Uttar Basti is the most effective treatment modality for Stree Vandhayatva( Vata predominant disorder), this hypothesis was acceptable with the extremely significant result obtained in a series of compiled research work. This is becoming boon for the couples who had no hope of being parents.