Takradhaara in Treatment of Hypertension 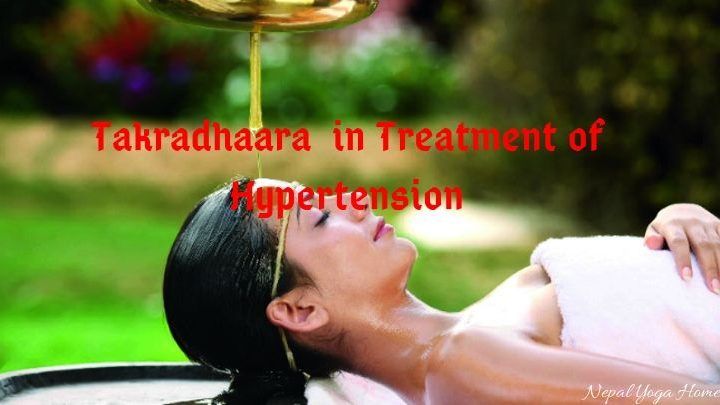 Takradhaara a way to heal Hypertension

Ayurvedic Panchakarma is famous for the different lifestyle-related diseases of the current scenario where other system of medicine are also found to be ineffective. Hypertension although, the handy literature is not observed in Ayurvedic classic, review of previous theoretical and clinical works on this topic point out certain mode of involvement of Dosha and Dushya (Vitiated tissues) in the genesis of it. Most of efforts show a prime role of Vata in association of remaining dosha Pitta and Kapha. Acharya Charaka permits to treat such disease without nomenclature by judging the involvement of Dosha Dushya only. The process of Rasa-vikshepa through Hridaya (Heart) i.e. anudhavana by Vyan Vayu within the body has become helpful to understand the Hypertention as Rasa-Rakta (whole blood) being the main mediator of vitiation of disease.

Hypertension (High blood pressure) is a circulatory state; arise from any cause, in which the pressure of the blood within the arteries becomes elevated beyond normal limits and can be cured by Takradhara. In general the term includes any rise in arterial pressure whether temporary involving systolic pressure, diastolic pressure or both of renal or normal origin. According to W.H.O. the blood pressure of 160/95 mm of Hg or higher should always be considered as hypertension. Blood pressure in between is considered as borderline or possible hypertension.

The rise of persistent systemic arterial diastolic blood pressure above 100 mm of Hg. or more is more risky than rise of systolic blood pressure. Generally systolic and diastolic hypertension occurs together. Systolic hypertension is caused from increased cardiac output or arterial rigidity in aged. Arterial rigidity by arteriosclerosis, affecting intima of arterioles and capillary of vital functional organs is pathogenic. Diastolic hypertension develops from the increased vascular resistance to the blood flow at the level of arterioles. In capillaries the blood flow is slow; hence, there is no development of resistance.

Shirodhara is a form of Ayurveda therapy that involves gently pouring liquids over the forehead (the ‘third eye’). It was developed by vaidyas (practitionars of Ayurveda) in Kerala, India for use in sukhachikitsa (restorative therapy) and can be one of the steps involved in Panchakarma. The name comes from the Sanskrit words shira ‘head’ and dhara ‘flow’. The liquids used in shirodhara depend on what is being treated, but can include oil, milk, buttermilk, coconut water, or even plain water.

Takradhara is a form of Shirodhara, an Ayurvedic treatment method which involves continuous flow of medicated butter milk to the centre of forehead continuously for up to an hour a day. The process can last from 7 to 21 days. It is a cure for vata predominant diseases, relieves tension and cures certain types of psycho-somatic diseases like hypertension.

Takradhara is an external treatment which is simple and effective, which acts on the nervous system and calms the mind and relaxes entire physiology, thus alleviates stress, anxiety, depression, blood pressure therefore, this project was undertaken to find a safe and effective Ayurvedic method of treatment for hypertension that would be free of any adverse effect and would maintain blood pressure within normal limits, i.e., below 140/90 mmHg as recommended by the World Health organization (WHO)

Takradhara (with Gooseberry decoction) helps in reducing both systolic and diastolic pressure. Gooseberry contains 5 different rasas (tastes) which is responsible for the pacification of hypertension caused by Vata as well as Pitta. Gooseberry in Ayurveda is considered as one of the most powerful anti-oxidant, rejuvenator and immunity booster plant.

Shiro Dhara is an external treatment which is simple and effective, which acts on the nervous system and calms the mind and relaxes entire physiology, thus, alleviates stress, anxiety, depression, blood pressure etc. a few studies done on Takra Dhara in Essential hypertension, were proved to be effective.