Explanation of Duties in Bhagawat Geeta 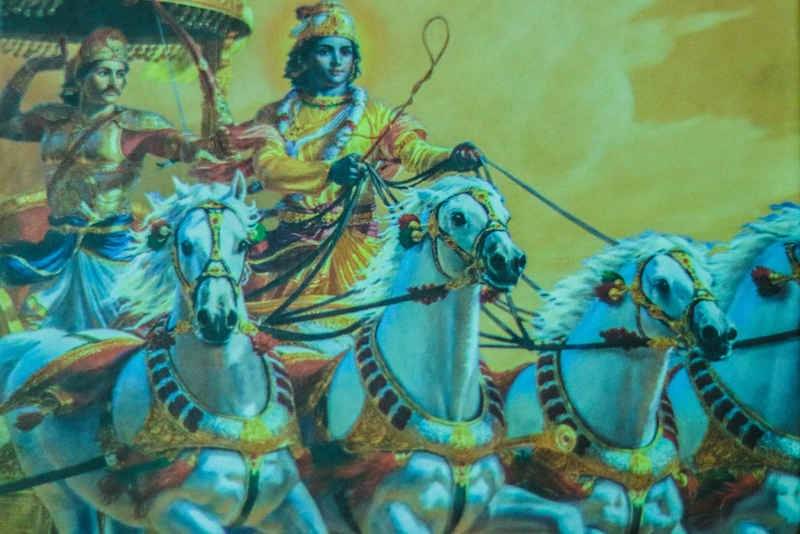 Duties in Bhagawat Geeta are explained practically.  A sacred, experimental, practical and scientific text, The Bhagawat Geeta, reveals all the aspects of life and beyond life; the entire dimension of the world and beyond the world. Let us go through the types of duties that are determined for an individual according to nature and innate quality.  Nowadays psychologists, motivators, guru, philosopher etc. suggest an individual perform the work as per the innate nature. This thing was already mentioned in Bhagawat Geeta 5000 years ago.

The fortieth verse of the eighteenth chapter says that there is no being on the earth or in another planetary system without some modes of the material world. Even demigod or god or another form of a creature of the higher world has some particular nature for the physical world. Due to these modes, people perform the various action; so, duties in Bhagawat Geeta has necessarily explained.  Succeeding verse number 41 says that the caste of the people (Brahman, Kshatriya, Vaisya, or Sudra) is distinguished by their work or natural qualities or modes of nature. Thus, caste is not the determined due to birth but the innate natural quality determines the caste. Verse forty-two says that some people have the qualities like – peacefulness, suzerainty of the mind and sense, self-control, austerity- facing all the difficulties to perform sacred obligations, forgiveness, honesty, external and internal purity, simplicity of mind, sense and behavior, belief in the true scriptures, god, life after death etc., study and teaching of Vedas and scriptures, wisdom, knowledge, realization of truth and God are regarded as Brahman quality.  Succeeding verse, forty-three number states that the Kshatriya consists the natural qualities like- brevity, heroism, majesty, power, authority, determination diligence and courage in battle, offering gifts leadership etc. Verse 44- Agriculture, cattle raising, trade, and business are the nature of work for Vaisyas; and Sudras’ nature is labor and service to others. Thus, the scripture says no work is greater and no work is smaller.

According to the explanation of duties in Bhagawat Geeta, the works or duties are distributed according to the qualities they possess, not by birth.  All types of duties are equally important. It doesn’t talk about untouchability. These false beliefs are created human itself. Caste, in fact, is not the matter to determine by following the parents. Caste is the product of characteristics, nature, and habits of an individual. So, there is no higher caste and lower caste. All castes are equally important. Verse 45- By performing his qualities of work (skillfully and sincerely), everyone can become perfect. Thus, to achieve perfectness, one need not do this or that; following one’s nature is sufficient. There is the guideline- how to perform the duty. Verse 46- In the performance of the duty man should worship the Lord (who is the origin of all beings, omnipresent) to attain the perfection. He should regard the duty as worship, or as a prayer. He needs to offer both the process and result in the lord. Verse 47- It is better to sign on in own natural duty determined by our character; even though deprived of the good attribute, than the duty of another well-done; for, executing the duty dictated by own innate nature, man does not undergo sin. Chapter 3, verse 35 says-It is better to do one’s spontaneous duty followed by innate quality, though devoid of merits, than to perform another’s prescribed task, though perfectly. Concretely, it is spanking to die in the performance of one’s duty than to propel in another’s path as another’s path is full of danger for one. It means to say death is far more beautiful while performing the natural duty faithfully than to remain alive by doing others’ duty which is unnatural and unfit able for one. Unnatural works just degrade one’s quality.

There is only natural work which enhances the human progress and consciousness.  One should not generate greed on others’ duty which seems better. Chapter 18, Verse 48- Every effort is beset by some evil, as fire is veiled by smoke; therefore, one should not forsake one’s endogenous duty even though it contains full of evil. It is clear that no work is free from defects, so it is not reasonable to relinquish innate duty and follow another’s duty which is abnormal for one.   Chapter 18, verse 49- One should control self, be unattached everywhere disregarding the material things and material enjoyments, this takes one to the consummation of actionlessness. This is also called the supreme perfectional stage of renunciation.  It is the stage of freedom from action and reaction.

“Duties in Bhagawat Geeta” is a clear-cut view to perform duties efficiently. Human is born with different qualities. Each quality is equally important to make the world complete and perfect. Different types of attributes of people are necessary for different sectors of the world. There are no people at all without at least one type of aptitude. Nature provides the at least one skill or ability. The innate aptitude determines the casteism. So, it is not necessary that parents and children belong to the same caste. It also happens that people belong to more than one caste. For example- a person has skill on agriculture and naturally concentrates on the study of scriptures; thus, his caste is Brahman-Vaisya. Sometimes, it happens that a person is 70% Kshetriya and 30 Sudra.  Maybe a person can belong to three castes at a time; perhaps the ratio of those castes is different. Whichever the quality the person possesses at the highest level, that type of quality one must perform. Thus, there is no role to determine the race or caste due to skin color they have, or from the parent’s heredity. People are suggested to do the duty according to natural skill; from that their caste system is appraised.

As the person carries out his own duty sincerely, generating no greed and attachment; offering everything (process to result) to the lord, man achieved the supreme knowledge. The regular worship of the lord with one’s natural duty, he reveals the reality. Worship to lord through natural duty means serving all people through the duty with the mind dedicating for the welfare of all. When more and more people start getting advantages through his duty, he finds the path of happiness, blissfulness, and truth. Thus “duties in Bhagawat Geeta” makes the person wise to act in this world and apart from this physical world.