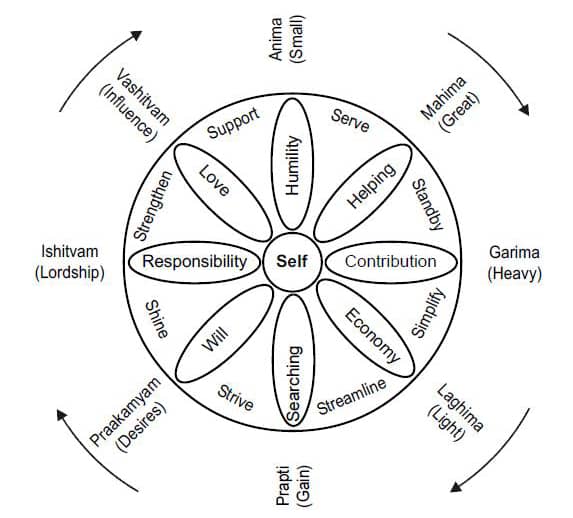 Ashta siddhi are the eight divine knowledge that gives one complete power over each and everything. They are mentioned in Hindu scriptures and texts. However, the average people may not know about the siddhis unless you are immersed in Hindu religious knowledges. Most notably people hear about ashta siddhi is during hearing Hanuman chalisa or Ganesh vajana, I also came to know about the term Ashta siddhi while reciting the hanuman chalisa.

In hanuman chalisa it is said that lord hanuman not only possess ashta siddhi but can also bestow ashta sddhi to his devotees. Hindu scriptures say that the people who have complete control over the siddhis can gain power of demigods. As the name itself says Ashta which means eight in sanskrit, the ashta siddhis are: Anima, Mahima, Garima, Laghima, Prapti, Prakamya, Isitva, Vasitva. Each siddhi governs certain character or certain aspect of nature and mastering each gives one distinct ability unique to other siddhis.

Anima is the first among the ashta siddhis. Mastering this siddhi gives the individual the ability to shrink down one’s body. This siddhi gives only the ability shrink the body; the owner of this siddhi can shrink the body to his own will even at the atomic scale but cannot increase the size of the body. The most notable use of this siddhi was done by lord Hanuman while spying on Lanka in search of mother sita. While spying lord hanuman shrunk his huge body to a very miniature form because of which the demons were unable to spot him.

Mahima one of ashta siddhi siddhi grants the user the ability to attain gigantic forms. It is like anima or it completes Anima siddhi. Anima lets you shrink your body while mahima lets you increase the size of the body even to the celestial level. Lord hanuman used mahima to increase his size and lift sumeru parbat to bring back Sanjivani booti to save Laxman’s life. Another use of mahima siddhi was done by Bahaman avatar of lord Vishnu. In which lord turned his size celestial level and in three steps he covered the entire existence.

Garima siddhi lets user to alter the weight of their body. However, like the relation between Anima and mahima, Garima only allows the user to increase the weight but not decrease it. By this siddhi one can increase his/her weight from little bit to infinitely, to the point one becomes immovable.

Laghima of astha siddhi is opposite to garima, allows its user to decrease the body weight. This siddhi decreases the weight of the user so much that the user will get the ability to fly. The weight can decrease so much that the individual can be light as a feather and gain levitation. Lord hanuman and various other demigods, demons knew this siddhi and were able to fly in the sky.

Prapti is very different from previous siddhis. While the previous siddhis focused on one’s body prapti focuses on things outside of body. Prapti siddhi gives one ability to instantly get the things they desire. The siddhi users can get anything they desire out of thin air. Various gods, demons, demigods had this ability in the ancient Hindu stories. The gods granted boon by making gifts out of thin air, demons made weapons out of nowhere.

Prakamya siddhi provides wide range of abilities to its user. It allows its user to increase their life length dramatically, teleportation, ability to live underwater. In the general sense prakamya enabels the user to adapt to the circumstances. Various rishimunis, chiranjivis and demigods had this ashta siddhi in the past as they could live under water and extend their lives to exceptionally longg time.

The individual obtaining this ashta siddhi gets the ability to influence the nature as per ones will. When someone attains this siddhi, the earth will move per his/her wish, the sky will rain as one’s demand, the wind will move as his/her sign. Every natural phenomenon will answer to ones will. Various peoples had isitva power, they could make tree grow instantly, rain down immediately and other many things.

Vasitva the last of ashta siddhi allows the user to control other people’s minds. The ability is not limited only to people’s mind but to animal’s mind also. This ability can tame wild animals, mentally disturbed individuals. Various avatars of lord Vishnu could immediately calm enraged animals and individuals using this ashta siddhi.